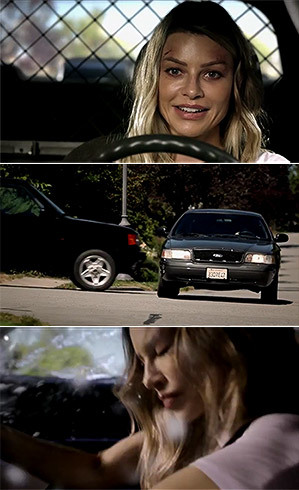 In a moving vehicle, a standard drive-and-talk scene plays out, usually an En Route Sum-Up or similarly mundane Shot/Reverse Shot conversation as generic scenery passes in the background, until WHAM! - the scene is violently interrupted by another car crashing into our unsuspecting characters, appearing suddenly in the heretofore innocuous view through the windows.

Sometimes we see what's coming a moment before the characters do, but often it is played extremely suddenly for maximum shock. One middle ground is to deliberately include a lot of Driver Faces Passenger dialogue to unsettle the audience and subtly foreshadow something going wrong. The crash itself may cause a Smash to Black. Frequently done deliberately with malicious intent (though this usage has largely become a Discredited Trope).

May result in characters Killed Mid-Sentence, unless they're Made of Iron. Compare Look Both Ways, where someone runs across a street and is suddenly hit by a car.