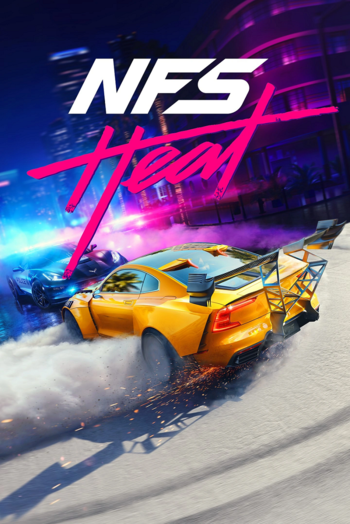 Hustle by day, risk it all at night.
"Street racing has no place on public roads. Mark my words, if you are out there and you're engaging in this type of activity, we will find you. And if you think that you can get away by just hitting the gas, then you're in for a surprise. Because, we're coming after you hard and we're coming after you fast. Trust me: there is no escape."
—Lt. Frank Mercer, Palm City Police Department
Advertisement:

Need for Speed Heat (stylized as NFS Heat) is the twenty-fourth installment (twenty-ninth counting spin-offs) in the long-running Need for Speed series. It was developed by Ghost Games (their last entry in the series) and released on November 8, 2019, on PlayStation 4, Xbox One, and Microsoft Windows. The game marks the series' twenty-fifth anniversary.

Palm City seems peaceful at first: a gorgeous sun-bathed beach-side, and brilliant, modern architecture. The Speedhunters Showdown keeps races clean, and the cops follow the rules. When night falls, however, things change. The rules are thrown out the window as racers risk everything for reputation, hounded by the PCPD's ruthless task force and its leader, Lieutenant Frank Mercer. And in the midst of all of this is you. You'll build your way up the ranks, regardless of what it takes. And maybe, just maybe, gain something more.