Literature / Rose of the Prophet 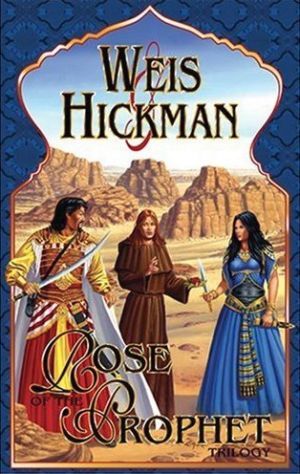 A little-known fantasy trilogy by Margaret Weis and Tracy Hickman, Rose of the Prophet manages to transcend its genre and create a beautiful and believable world/cosmology, memorable and lovable characters, and an entertaining and quite moving story—all while conforming to the rules and structure of your standard Dungeons & Dragons-style role playing game. Really—it has to be read to be believed.
Advertisement:

Most of the action takes place within the cities and deserts of an Arabian Nights-esque land in a multi-faceted world of magic and adventure. There is crisis among the One-And-Twenty Gods and their attendant Immortals; two Gods have diminished into non-existence, the gods all blame each other, and one God fears the conflict will soon spread to the human realm as jihad, holy war.

The Wandering God Akhran tries to unite two feuding tribes of his desert nomads against the threat, by commanding the marriage of Princess Zohra, of the shepherding Hrana tribe, to Prince Khardan, Caliph of the horse-herding Akar...but seeing as Chaos and Impatience are two of Akhran's attributes (and his people are faithful followers indeed), it doesn't go as well as Akhran might have wished.

Akhran convinces Promenthas (a God of a medieval-Europe style land across the ocean) to ally with him, and they arrange for the young wizard Mathew (lone survivor of a slain ambassadorial party) to wind up among the feuding nomads. Khardan, Zohra and Mathew, along with their tribes' djinn and a guardian angel, must somehow prevent a massive army from conquering the mortal world, a vastly overpowered efreet from banishing all other Immortals, and one god from eliminating all the others—and shattering the cosmic balance forever.