Literature / The Shadow of Kyoshi

This page contains unmarked spoilers for The Rise of Kyoshi. You have been warned. 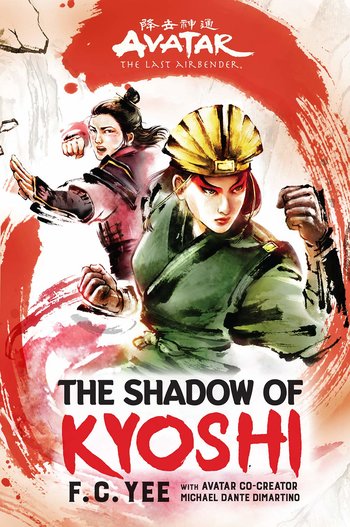 We have no need of mercy. Only justice
"My friend is not a diplomat. She is the failure of diplomacy. She is the breakdown of negotiations. There is no escalation of hostilities beyond her."
— Tieguai the Immortal
Advertisement:

The Shadow of Kyoshi is a 2020 novel set in the Avatar universe written by F.C. Yee (with consultation by series creator Michael Dante DiMartino) and is the sequel to The Rise of Kyoshi. The story picks up two years later with the more confident and skilled titular heroine having introduced herself to the world as the true Avatar.

When the novel starts, Kyoshi has used her newfound wealth to set up shop in Ba Sing Se with her Airbender assistant Jinpa to quash various bandit uprisings across the Earth Kingdom. Jinpa keeps trying to get her to focus more on the political/diplomatic side of being the Avatar but she's hesitant to because she's not very good at it. She gets to a point where she can't ignore it anymore when she gets personally invited to attend the festival honouring the previous Fire Nation Avatar, Szeto, by Fire Lord Zoryu himself.

From there she gets dragged into the internal conflict of the country, including drama with the Fire Lord's bastard half-brother, Chaejin while dealing with problems of her own, like tracking down her friend Yun who inexplicably came back from his presumed death to kill Jianzhu at the climax of the previous book.

While this is currently the planned conclusion of the Kyoshi duology the novel series, now under the banner of The Chronicles of the Avatar is set to continue, with the next novel focusing on Avatar Yangchen titled The Dawn Of Yangchen.