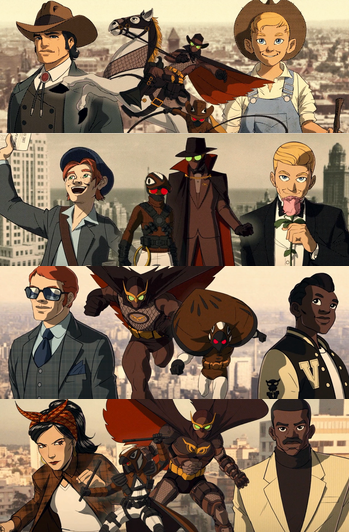 "You forget that he was once my apprentice, just as you were once his."
— Count Dooku, regarding Qui-Gon Jinn, to Obi-Wan Kenobi, Star Wars Episode II: Attack of the Clones
Advertisement:

In fiction, a common revelation is that the protagonist and antagonist were trained by the same mentor. This is occasionally taken even further by the revelation that another important character is the one who trained the mentor, and so on up the line.

When done well, this can add to the drama and development of the story and characters. It also allows for the comparing and contrasting of characters using similar skill sets at varying levels of mastery. When done badly, it can come off somewhere in the range of an Ass Pull or Contrived Coincidence. Either way, it's generally a concession to the Law of Conservation of Detail.

As noted above, an inevitable result of this chain, if it gets long enough, is one link having to fight another. Also, the problems of one of the prior masters may end up dropped in the lap of the latest disciple.

Chains should consist of at least three characters who can be connected in a straight line (in other words, character A trained character B who went on to train character C). The chain can branch out in more than one direction, but just one master training two apprentices doesn't count.

Depending on how the Master Apprentice relationship is depicted, this can lead to a not-blood related version of Badass Family. See also A Pupil of Mine Until He Turned to Evil. If two generations of such a chain team up, it's a Student and Master Team; see also Rule of Two. If the members of the chain pretend to be the same person to create a false legend of immortality, it's Legacy Immortality. Frequently deals with the Sempai/Kōhai dynamic. Passing the Torch is also not uncommon.