Turn in Your Badge 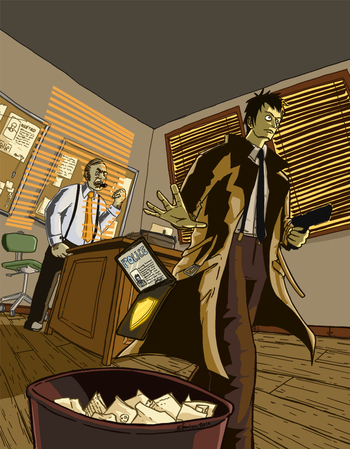 "Your gun and badge"

That cop has always been a loose cannon, but this time he's stepped over the line. He is ordered by his boss to turn in his badge and gun, and then go home on an extended "vacation." This is sometimes accompanied by an Insignia Rip-Off Ritual.

The cop ignores this directive and finishes tracking the perp down. Sometimes, it's because he's a Cowboy Cop. Other times, It's Personal. When the bad guy is eventually caught, the cop's boss never reprimands the rogue cop and sometimes even admits he was wrong. There won't even be a McCloud Speech about all the regulations the cop broke on this excursion, not the least of which being ignoring an order — probably because he technically wasn't acting as a cop, but merely breaking the law as a regular citizen...

But then the cop might actually honor the original directive.

A possible variation involves the following: the cop was never actually off the force but was merely pretending to be, with his superiors' knowledge, to fool a bad guy, sometimes another cop (see Fake Defector, which is a case of Not Himself). See Taken Off the Case for a milder version of this trope.

If, instead of being suspended, the cop quits to make a point, that's Resign in Protest.

Video montage of movie cops turning in their badges.

Video montage of movie cops turning in their badges.