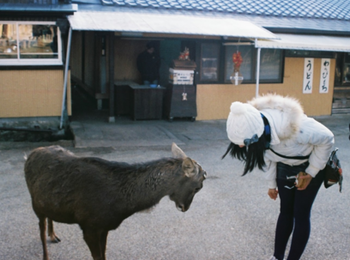 "Greetings, deer-san!" "Greetings, human-san!"
How courteous is the Japanese:
He always says, "Excuse it, please."
He climbs into his neighbor's garden
And smiles and says, "I beg your pardon."
He bows, and grins a friendly grin,
And calls his hungry family in.
He grins, and bows a friendly bow:
"So sorry, this my garden now."
— Ogden Nash
Advertisement:

Japan has a very distinct culture compared to its neighbors, and one aspect noted by many visitors to Japan — especially Western ones — is the extreme emphasis on politeness, often to the point of obsequiousness or just being annoying. Although other Asian cultures often come across to Westerners as obsessed with confusing rules of etiquette, the Japanese are impossibly polite even by Asian standards.note Although averted historically when Korea was considered much more polite than Japan due to its extreme adherence to Confucianism to the point where the Japanese thought of the Koreans as soft and weak. It's Truth in Television, but seems to come out in broad parody. This is all a relic from the Feudal Era, when Japanese society was built around a rigidly hierarchical system of aristocracy — just like Medieval England, which produced its own strange flavor of politeness.

The Japanese, in general, take the art and tradition of Sacred Hospitality very seriously. They will have many unwritten rules on etiquette and public social behaviour, not just amongst themselves but also to guests, visitors and anyone they may encounter in life in general. These include but are not limited to: avoiding explicit disagreement or refusal at all costs as to not offend the guest; refraining from criticism of one's own in-group (whether that's your family, your company, your school club, or whatever) in front of outsiders; never bragging, either about yourself or about your in-group (you do not use honorifics about people from your own group while speaking with someone outside your group); extraordinary deference toward others in general, especially on guests and authority figures; and indirectly praising others but always downplaying one's own accomplishments. In a Japanese household, whenever introducing oneself to new guests and friends, offering a Tea Ceremony is always a must. These are all taken to such extremes that it's necessary to learn a drastically different vocabulary and even set of grammar rules for expressing degrees of politeness in the Japanese language.

The rules can interact in ways that are hard for foreigners to predict. For example, it's polite to diss your superiors when talking to outsiders, but only behind your superiors' backs. If you're present and your superiors aren't, you're a representative of your group, and talking about your excellent leadership would be bragging. If one of your superiors is present, you have to present a united front; intra-group tensions aren't just disturbing to watch in action, they're impolite.

Contrary to what is sometimes believed, it's fine to say "no" in Japanese — to neutral questions. "Do you know Ben?" "Have you ever been to Tokyo before?" But turning down a polite request with "no" is rude; the right way to do it is to apologize, then trail off without giving full details, which is very common in general in Japanese. ("I'm sorry, that's a bit difficult..." — or even just "I'm sorry, but...") The Japanese will do this with all reasonably polite requests, but not necessarily with factual questions — which is about the same level of politeness as upper-class Europeans and Americans, but with an emphasis on different things.

However, this stereotype has only become truly popular relatively recently, and the older generation of westerners will likely be more familiar with the two other stereotypes associated with the Japanese: the angry, screaming, Katana-wielding, Tenno-Heika-worshipping, bushido-on-steroids Proud Warrior Race Guy (primarily because of memories of World War II); or (in Cyberpunk works) the corporate executive or investor of a Mega-Corp, who acts superficially polite but is utterly ruthless in the pursuit of efficiency, profit and technological domination at all costs. Of course, both of these stereotypes are colored by anti-Japanese feeling, and have rather been discredited.

From the Japanese perspective, just about everyone in the world except for Western aristocrats is unimaginably rude. Modern Americans, in particular what with their freedom-of-speech culture, are often stereotyped as loud and obnoxious even when they're not unleashing actual Cluster F Bombs — though almost as often they're portrayed as overly polite thanks to most Japanese learners defaulting to polite vocabulary and grammar. They do, however, have a lot of respect for the British due to shared norms of politeness, which tends to be reciprocated. Likewise with the old American South; Gone with the Wind is huge in Japan for its depiction of Southern Belles and Gentlemen who are similar in many respects to idealized images of Japanese behavior, with the latter having a Bushido-like code of honor, and KFC owes a lot of its popularity in Japan to Colonel Sanders.

If this is portrayed negatively, see also Inscrutable Oriental. See also Yamato Nadeshiko, who aspires to excel at this. See also Overly Polite Pals. Contrast Japanese Spirit and Anime Land, where Japan is portrayed as a World of Ham (and also The Idiot from Osaka for a specific region of Japan that's stereotyped to be crude and impolite). Contrast also Asian Rudeness.