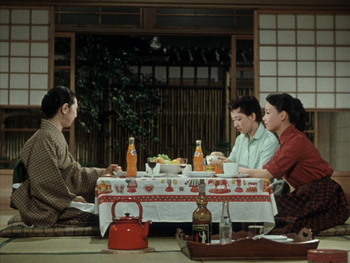 Can't get away from that teapot.
"Eventually, parents have to give in."
Advertisement:

Hirayama (Shin Saburi) is a fairly ordinary Tokyo businessman in late middle age. He is not as hidebound by tradition as some, as indicated by the sage advice he gives to a friend whose daughter has run away to be married. But when a man named Taniguchi (Keiji Sada) shows up at his office one day and asks for the hand of his daughter Setsuko (Ineko Arima) in marriage, Hirayama flips out. Angry over not being asked before Taniguchi and Setsuko chose each other, Hirayama refuses to consent to the marriage. It eventually becomes clear that his daughter is going to get married anyway, however, and Hirayama is left to make peace with his daughter's wedding and Japan's rapidly changing culture.