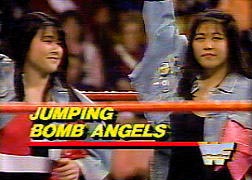 "You know, I'll tell you, I have seen a lot of good tag teams, and The Glamour Girls, I'm gonna go on the record, they're in trouble. Because the Jumping Bomb Angels are something else. I've never seen lady wrestlers with the kind of moves that they got. They're like watching a Dynamite Kid or like watching a Randy 'Macho Man' Savage or like watching a Ricky Steamboat with those aerial moves. It was just fantastic, I enjoyed it."
—Jesse "The Body" Ventura, Survivor Series 1987
Advertisement:

The Jumping Bomb Angels were a female Japanese Professional Wrestling Tag Team from The '80s, composed of Noriyo Tateno and Itsuki Yamazaki. They formed in 1981 and wrestled for All Japan Women's Pro-Wrestling. On January 5, 1986, they defeated Bull Nakano and Condor Saito for the AJW WWWA World Tag Team Titles

. They arrived in WWE for a feud with the WWF Women's Tag Team Champions

The Glamour Girls (Leilani Kai and Judy Martin). They made their one PPV appearance as the survivors of the Team Moolahnote Moolah/Rockin Robin/Velvet McIntyre/Angels/-Team Sherrinote Sherri/The Glamour Girls/Donna Christanello/Dawn Marie (Johnston, no connection to the ECW/WWE Diva) match at Survivor Series 1987. They won the belts in a 2 out of 3 Falls Match at WWF Royal Rumble 1988 on January 24th, and lost them back on AJW's TV show on June 8th. They broke up in 1991 when Yamazaki retired.