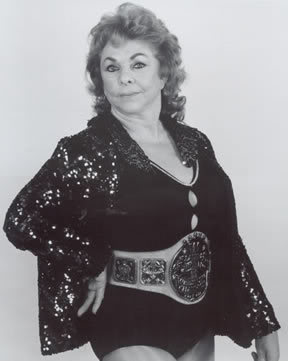 She began her career working with promoter Billy Wolfe and his wife, wrestler and trainer Mildred Burke, as Slave Girl Moolah, as well as working as a valet for "Nature Boy" Buddy Rogers, accompanying him to the ring while providing eye candy for the male audiences and assisting Rogers against his opponents. On September 18, 1956, Moolah defeated Judy Grable to win the NWA World Women's Championship, after which Vince McMahon, Sr. dubbed Ellison with the name The Fabulous Moolah. She would go to become the most prominent holder of the title for approximately the next 30 years.

When it was finally time for Lauper and Albano to settle their differences in the ring, a match-up was scheduled with Albano representing Moolah against the challenge of Lauper's protégé, Wendi Richter. After much buildup and hype, the Fabulous Moolah lost the championship when defeated by Richter, who had Lauper in her corner, on July 23, 1984 in the main event of The Brawl to End It All, which was broadcast live on MTV. Prior to the match, the WWF promoted Moolah as holding the championship for the previous 28 years, meaning that (for WWF at least) she held the longest title reign by any athlete in any professional sport.

After losing the title to Richter, Moolah aided Leilani Kai in defeating Richter for the title in February 1985. Richter won it back at the inaugural WrestleMania, but when Richter's relationship with the WWF soured, Moolah donned a mask as "The Spider Lady" and regained the belt on November 25, 1985, in a controversial decision. Richter was never told she would be losing the title and fell victim to a real-life "screwjob" finish known as "The Original Screwjob"

(to differentiate it from that other screwjob), and promptly quit the WWF afterward. Moolah continued to be champion for another two years—excluding a six-day reign by Velvet McIntyre during a tour of Australia in 1986—before losing the belt to Sherri Martel on July 24, 1987.

Afterwards, Moolah went into semi-retirement, only making very sporadic appearances (during which she became the first woman to be inducted into the WWE Hall of Fame in 1995), until in 1998, she and longtime friend Mae Young re-emerged in the WWF (later renamed World Wrestling Entertainment, then WWE), appearing regularly in comedic roles. This time saw 76-year-old Moolah defeat Ivory at No Mercy 1999 in October 17 to regain the WWE Women's Championship, thus becoming the oldest WWE Women's Champion ever, though she lost the title to Ivory eight days later. She continued making appearances alongside Young until her death on November 2, 2007.

Tropes related to The Fabulous Moolah: