Stranger Behind the Mask 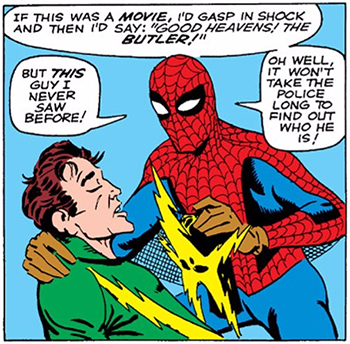 "You tricked and fooled your readers for years. You've tortured us all with surprise endings that make no sense. You've introduced characters in the last five pages who were never in the book before!"
— Lionel Twain, Murder by Death
Advertisement:

So you've got this mystery, such as the identity of the villain. There are many theories on this, and audience is kept busy speculating to the very last moment. And well, would you look at that!? The heroes have captured the villain and are about to remove his mask. It is finally time for The Reveal!

You have just met the Stranger Behind the Mask, where The Reveal proves to be something or someone we've never heard of before, and had no reasonable way of expecting. This can often result in an Anti-Climax, and is almost always an Ass Pull. Both Ronald Knox and S.S. Van Dine attempted to create rules for Detective Fiction, one of which was created in order to either prevent or avert this trope from occurring. Knox, indeed, made it his first commandment: "The criminal must be someone mentioned in the early part of the story..."

Typically a Writer Cop Out. If what is revealed also isn't particularly consistent with the story, it's an Ass Pull. Compare with Deus ex Machina, where the unpredictable event is a solution to an otherwise unsolvable problem, and with The Dog Was the Mastermind, where it is revealed that it was a minor character that nobody would have suspected, but had been previously introduced. Often relies on Contrived Coincidence to keep the audience interested.

Though often seen as unsatisfying, this is often a case of Truth in Television. Detectives who investigate a crime almost never, ever know who the perpetrator is unless they are a repeat offender known to the authorities; the phenomenon of the culprit being someone they know personally or had run into earlier is actually quite unusual. It makes sense though, since there's no logical reason that happening to personally know a detective should make one more likely to commit crimes. And in fact, if one thinks about it for a moment, the trend of the detective happening to personally know the perp itself probably started out as a twist ending, and detective stories having a rule where the person behind the mask is always someone the detective knows makes about as much sense as if romance novels had a rule where the charming stranger who strolls into town and catches the eye of the protagonist always turns out to be a long lost sibling!

But that usually doesn't make for the most interesting story, so this trope is rarely used in fiction.

When Played With, this can turn from Bad Writing into a very skillful twisting of the story. See Anticlimactic Unmasking for In-Universe versions. Contrast Charlie Brown from Outta Town.

May be considered The Un-Twist.

By the nature of this trope, all examples will inherently be mild spoilers.