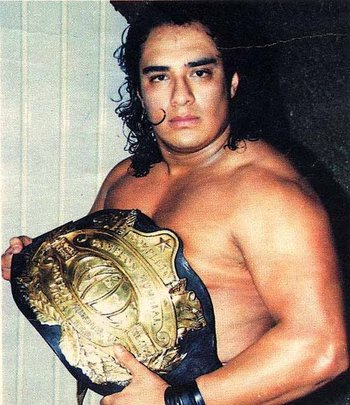 MIKE TENAY: "Don't be fooled by his stocky physique".

César Cuauhtémoc González Barrón (January 9, 1968-May 11, 2019) was a Mexican Professional Wrestler and actor best known as Silver King. He debuted in the UWA promotion in Mexico in 1985, losing his mask very early to El Hijo del Santo. He formed a long-running team with El Texano as Los Cowboys/Los Efectivos. He also wrestled for CMLL, All Japan Pro Wrestling, New Japan Pro-Wrestling, WCW and numerous other promotions, primarily in Mexico and Japan. He died during a match with Juventud Guerrera in London, England on May 11, 2019.

Along with his CMLL World Heavyweight Title win, he also was a 1x UWA (Mexico) World Tag Team Champion

"Don't be fooled by his stocky tropes":