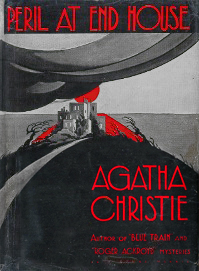 A novel by Agatha Christie published in 1932, featuring Hercule Poirot.

While staying at a Cornish resort, Poirot meets Nick Buckley, the beautiful young mistress of End House, who has escaped several attempts on her life. He decides to try to protect her and track down the would-be killer, and comes to End House where he meets an assortment of mysterious characters: Nick's cousin and lawyer Charles Vyse, the housekeeper Ellen, Mr and Mrs Croft who are leasing the cottage on Nick's property, Nick's friends Frederica Rice, Jim Lazarus, and George Challenger, and lastly her cousin Maggie, whom she asked to stay with her at Poirot's suggestion. On the night of a firework party, a corpse is found, wearing Nick's shawl...

The novel was adapted for a double episode in series two of ITV's Poirot starring David Suchet in 1990; this episode was generally very faithful to the novel. Tropes unique to this adaptation can be found on the series page.