Literature / The Murder of Roger Ackroyd 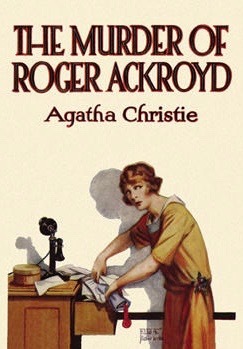 A 1926 mystery novel by Agatha Christie, The Murder of Roger Ackroyd was the book that propelled its author to fame, and is still widely regarded as one of her finest, and certainly among her most notable. Even today the Twist Ending remains controversial.

Mrs. Ferrars, a wealthy widow in a quiet English village, has apparently taken her own life. Local industrialist Roger Ackroyd, who was romantically involved with Mrs. Ferrars, confesses in private that his lover had admitted to him that she murdered her bullying, abusive, drunken husband with poison...and that someone had found this out, ruthlessly blackmailing her and driving her to suicide. Now, a letter in the post from Mrs. Ferrars is about to reveal all—but before Ackroyd can learn and expose the identity of the culprit, he is found dead in his study, stabbed viciously in the neck with his own ornamental dagger. An apparently open-and-shut case uncovers a likely suspect, but the village has by chance a new resident; Monsieur Hercule Poirot, the noted detective, who has retired to the countryside to grow vegetables. His legendary "little grey cells" intrigued by the case, Poirot soon discovers that all is not as it seems...

The story was adapted as an episode of Poirot in 2000; tropes concerning this adaptation can be found on the series page. The novel was also made into a Russian film in 2002, entitled Неудача Пуаро ("Neudacha Puaro" — "Poirot's Failure").

And a quick note on spoilers: while every effort has been taken to avoid spoiling plot-crucial details regarding the novel on this page, the nature of the story (and the Twist Ending especially) means that it's hard to discuss without some kind of spoileriffic information slipping through. New readers should take that into account before proceeding on.

This detective mystery provides examples of: