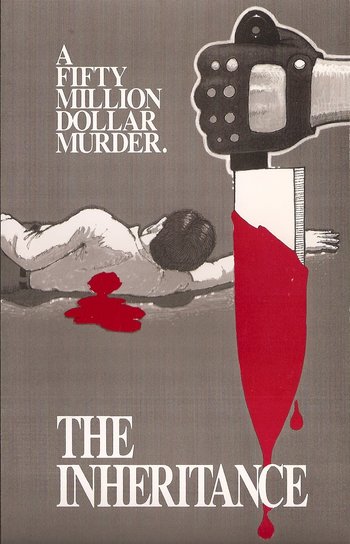 Professor Farnsworth: That's why I've made you my sole heir. The day I die, you'll be a very wealthy woman. Oh my, yes. Incredibly wealthy. The day I die. Because you're so unimpulsive.
Leela: [kicks him into a pit of deadly animals]
— Futurama
Advertisement:

Sometimes, the prospect of legally inheriting something can prompt the heir to speed up the process by way of murder.

Often, the heirs are just impatient for wealth or power — they want it now, not eventually, and see no reason to wait (or have a pressing need for money and can't wait). Other times, they're worried that an inheritance which they're currently in line for will be changed to leave them nothing — if they don't inherit quickly, it might be too late.

Typically, inheriting will require a will, so tropes relating to that are often in play. A variant is for the murderer to be not the beneficiary of inheritance but the person who'd administer it, which may let them get their hands on it just as well. Another variant, especially in more modern works, is for the murderer to be after not an inheritance but an insurance payout, a different way to benefit from offing your nearest and dearest.

Most jurisdictions have laws that prevent a murderer from inheriting anything from the victim's estate, so not getting caught is essential to making it work. As such, the trope has often been the basis of murder mysteries, especially historically, although it's now becoming something of a Discredited Trope; it's rare to find a murder mystery where the inheritor actually turns out to be the murderer, although it's very common nowadays to find it at least Subverted with the inheritor being a prime suspect who turns out to be innocent.

Tontines are famous for causing this to happen, to the point where they seldom show up in fiction otherwise. Sometimes comes in a combo with Forging the Will, with the murderer both fabricating a claim to inherit and triggering the inheritance. A Black Widow may be a specialized user of this trope, combining it with being a Gold Digger (although that doesn't necessarily involve inheritance so much as becoming joint owner of everything before the murder).

A subtrope of Murder in the Family. Compare The Evil Prince, if the inheritance the person is after is their father's throne.

Since this is a Death Trope, there will be unmarked spoilers.