Literature / The Murder on the Links 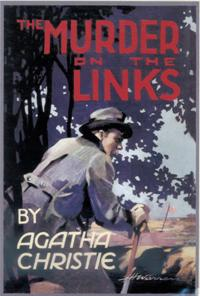 Only the second of Agatha Christie's novels to feature Hercule Poirot, The Murder on the Links was first published in 1923. Millionaire businessman Paul Renauld is found stabbed to death in an open grave in the golf course he was constructing. Poirot, who had received a letter from Renauld shortly before his death, tries to trace the murderer. There are several suspects: the widow who inherits Renauld's entire estate, the son who had recently quarreled with his father, the woman who might have been Renauld's mistress... However, the pattern of events in the murder of Renauld bear strong similarities to a case that happened 20 years ago. Is the same mind at work behind both cases?

The story was adapted 1996 for the sixth series of Poirot. Tropes unique to the adaptation can be found there.

The Murder on the Links provides examples of the following tropes: