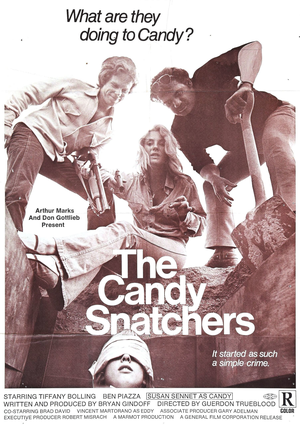 The Candy Snatchers is a 1973 exploitation film written and produced by Bryan Gindoff and directed by Guerdon Trueblood. Teenage heiress Candy Phillips (Susan Sennett) is kidnapped by three small-time criminals - Jessie (Tiffany Bolling), her brother Alan (Brad David), and their friend Eddy (Vince Martorano) - in order to extort diamonds from her wealthy father Avery (Ben Piazza). The only witness is a young boy named Sean Newton (Christopher Trueblood), but he is mute and unable to summon help.

The Candy Snatchers contains examples of: