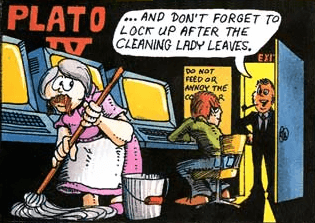 Arthax: That was... Demeaning.
Yeagar: I never knew you could storm a castle like this...
Nodwick: The thieves' guild would be unstoppable if they invested in blue coveralls with the name "Al" embroidered on them.
— Nodwick, in this strip

OK, so you have to break into this high tech science lab, or a government facility, or a fancy bank, or something. It doesn't really matter what this place is to you, because it's swarming with security and there's no way you'll ever get in... or is there?

Enter the Janitor Impersonation Infiltration. Custodians, janitors, cleaning ladies, what do these people have in common? They have access to every room in the building and might as well be part of the scenery. No one pays attention to them or wonders why they’re still around after hours while everyone else in the building’s gone. So if you’re looking for an easy-in, they’re the perfect candidates for impersonating when one has to steal that secret formula or those hidden financial records.

Other similar jobs, from traveling merchants to prostitutes, from waiters to pest control, all of which have the same relative anonymity of the janitor and are Beneath Notice, may also qualify for this trope, and it has actually being successfully exploited throughout history at nearly every age. After all, even the most guarded room in the world still needs to be cleaned, and even the most guarded person needs to be serviced, and it's literally impossible to know every janitor, or plumber, or whoever else, in the face, especially if it's a new guy every week.

Being that these people might be secret agents (and by proxy a Master of Disguise), there's a definite possibility of Almighty Janitor overlap. Compare Dressing as the Enemy, The Infiltration, Bathroom Search Excuse, Room Disservice, Delivery Guy Infiltration, and Surprise Inspection Ruse. Depending on what is done with the real janitor, may overlap with Mugged for Disguise, and you might want to be careful about running afoul of Confronting Your Imposter. If the impersonator seems to do this often in different situations, it might be a case of New Job as the Plot Demands. May overlap with Black-Tie Infiltration if infiltrating a party as the hired help.

After Beef and Jerry tracks down's Jerry's missing phone at Winter World and they can't get inside due to being closed because of a private party, Beef gets the idea to get inside by sneaking through the employee entrance and Jerry has them both wear employee costume to blend in.

After Beef and Jerry tracks down's Jerry's missing phone at Winter World and they can't get inside due to being closed because of a private party, Beef gets the idea to get inside by sneaking through the employee entrance and Jerry has them both wear employee costume to blend in.