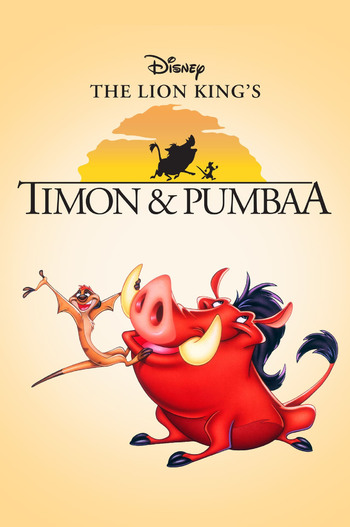 The Lion's King's Timon & Pumbaa (September 8, 1995 — September 24, 1999) is an American spin-off television series to Disney's The Lion King, which stars the eponymous pair from the film. The show first aired on The Disney Afternoon and CBS. As the show focuses on the movie's comic relief characters, the tone is considerably more comedic than the film. Much like the Little Mermaid and Aladdin TV series, the series has the characters going on new adventures, giving them backstories and occasionally showing more depth on the characters' friendship.

Set after the events of the original film (and the subsequent Direct to Video P.O.V. Sequel The Lion King 1½, which has the same tone as the series and Retcons one episode), Timon and Pumbaa live their Hakuna Matata lifestyle, having their own (mis)adventures both within and outside of the African Savannah. Throughout their journey, they meet new friends and enemies, including Quint and Smolder. Some of the film's other side characters (Rafiki, Zazu, and the hyena trio Shenzi, Banzai, and Ed) are also given their own respective segments occasionally, with Rafiki's being under the title "Rafiki Fables" and the hyenas' under the title "The Laughing Hyenas". As a spin-off of The Lion King, expect Artistic License out the holy wazoo.

The series is notable for being the first installment in the Lion King franchise to feature onscreen appearances by humans, as humans were neither seen nor mentioned in the original film, but their existence was alluded to. The series also occasionally features more supernatural elements than seen in the movie, such as magic, monsters, genies, etc., several of which are lampshaded by the characters.

The first season began on September 8, 1995 on the syndicated Disney Afternoon block (September 16, 1995 on CBS) and ended on December 29, 1995 (December 16, 1995 on CBS). A second season would begin airing September 2, 1996 on the Disney Afternoon (September 14, 1996 on CBS) and end on November 25, 1996 (November 9, 1996 on CBS). Reruns aired on Disney Channel and later Toon Disney (the latter being for about a decade after its cancellation), but have rarely been seen on any networks since. As of November 2019, all episodes are streaming on Disney+, in remastered high definition.

A character sheet for the series is currently under construction here.