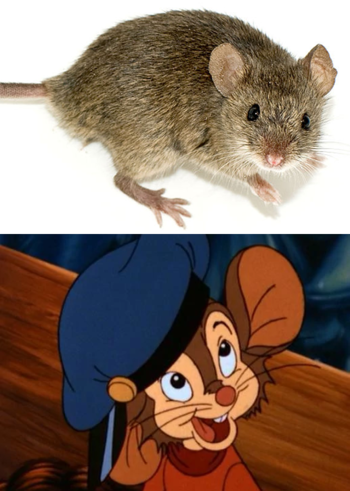 Often in animation, a cartoon mammal's pinnae (or outer ear) shape is drawn in such a way that looks unusual for its species in Real Life.

Sometimes, toons, especially old 1920s/1930s cartoon characters or characters based on them, will have very stylized ears that sometimes hardly look like real ears at all.

The point of this trope is that some animals that are clearly based on real species, whether Funny Animal or not, are drawn with an ear shape different from that of its Real Life counterpart for stylistic purposes (usually due to the rules of cool, cute and just for simplified visual identification), or because they simply didn't know what that animal's ears really look like, especially in cases of Seldom-Seen Species. For example, cartoon rats and mice with hair on the backs of their ears are a case of artistic license, because in Real Life the backs of their ears look hairless. Additionally, setting "furry" aside, cartoon humans can also have ears which look unlike almost any human ear you've seen. Also, if the character has Expressive Ears, drawing them this way might help to enhance the level of expression.