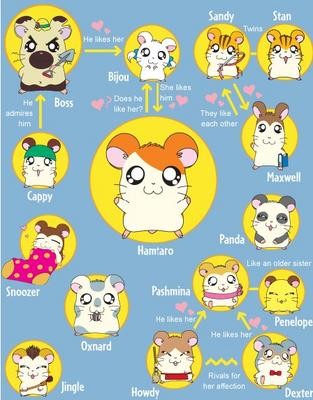 Hamtaro (Tottoko Hamutaro in Japan) is an anime series based on a series of children's books of the same name by Ritsuko Kawai. The focus is a group of adorable hamsters—Hamtaro and his Ham-Ham buddies lead exciting adventures while his owner Laura is off at school having her own adventures.

It ran from 2000 to 2006 and lasted for nearly 300 episodes, only 104 of which were translated into English and aired on Cartoon Network. It later spawned a spin-off series of five-minute episodes known as "Tottoko Hamutaro Hai!", which aired on the various incarnations of TV Tokyo's weekday morning variety show NoriSuta. There were also four movies, none of which made it overseas.

It also spawned six handheld video games which, although largely obscure to those not familiar with the series, were considered to be rather good games for licensed media.

The Japanese version of Story of Seasons: Trio of Towns contains Hamtaro as an unlockable pet, however he was removed in international versions due to licensing issues.

A new series named Tottoko Hamtaro Dechu note Roughly equivalent to "It's Hamtaro" in English. has been aired

; however, it's only a rebroadcast with a handful of new scenes.

Example of:
And I'm the Queen of Sheba