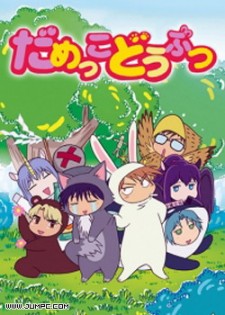 Damekko Doubutsu ("Useless Animals") is a manga by Noriko Kuwata, which was serialized in Manga Life from 2001 to 2003. It was adapted to a 26-episode anime series in 2005, with each episode being only five minutes or so in duration.

The series focuses on a timid wolf named Uruno, who stumbles into a forest one day on the brink of starvation. He soon encounters an aggressive, chain-smoking rabbit named Usahara, along with many other animals with no special talents who do not meet the expectations of how their species should behave. While the characters view each other as animals, they're visually depicted as people in animal costumes.

Sometimes, the animals in this forest are the most beautiful humans in silly costumes you've ever seen!

Sometimes, the animals in this forest are the most beautiful humans in silly costumes you've ever seen!