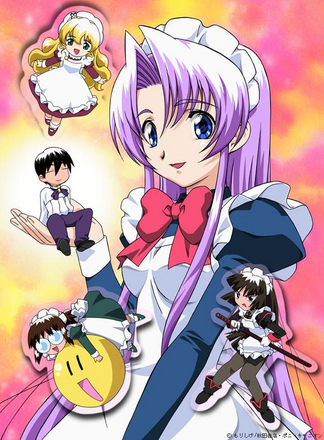 Taro Hanaukyō, a young boy grieving for his mother, has been summoned to his grandfather's estate for reasons unknown. Upon arrival, he discovers several facts that are to change his life drastically:

It is that last point that that really causes some concern for poor Taro, as it is rapidly demonstrated to the viewer that he has a violent allergic reaction to contact from women.note This is only true in the first anime series; in the original manga and the second adaptation, he just doesn't like all the attention. Unfortunately for him, the young ladies of the Hanaukyo estate are zealously dedicated to their job, be it organizing his schedule, assisting his studies, bathing with him in the dozens, assisting him with his zipper in the washroom....

Fortunately, there is also Mariel, the de facto head maid and apparently, the only woman Taro can be near without turning interesting colours.

Hanaukyo Maid Team (Hanaukyo Maid Tai) is a manga by Morishige, which was serialized in Monthly Shonen Champion from 2000 to 2006 and compiled into 14 volumes. It was adapted into a anime series in 2001; however, the anime was cut short due to difficulties with the production company. Only twelve episodes were aired out of a planned eighteen, and only three more were made and included on the DVD release. It was rebooted in a second series, Hanaukyo Maid Tai: La Verite in 2004. In this series, Taro is merely put off by too much attention from women, though Mariel remains the exception. It also introduces a dramatic plot line from the manga around Mariel, and formally introduces Yashima Sanaenote Yashima Sanae originally appeared in the opening credits of the original series (but only appeared in episodes 14 and 15), with a slightly different appearance (blue hair, light skin) and without being given a name. and her strong loyalty to Konoe Tsurugi, head of the Security division of the maids.

To repeat: the entire house staff are maids.

Note: If an episode number below doesn't mention which season it's from, it's the first. If it's from the second season it will say La Verite.