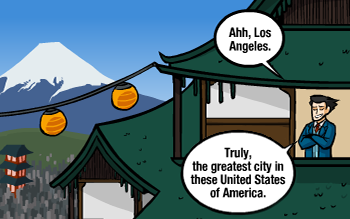 "
"I've said this before, but one of my favorite things that happens to media during localization is when the studio tries to pass it off as taking place in the United States when it very clearly does not."
— Katie Tiedrich on the localization of the Ace Attorney games
Advertisement:

One of the many odd things dubs of foreign media tend to do is replace the setting where the work takes place — even when it's very clear that it's not set where they say it is. It's one thing to re-dub the lines; it's quite another to remove the very clear visual references to the original setting. But the dub writers are very persistent, going out of their way to make even the most obvious foreign reference totally a "local" one. The only way to really get away with that would be to assume that Viewers Are Morons (or at least culturally ignorant) - because you can't tell a place is outside America because of PAL Televisions and banknotes with crazy neon colors, right?

The reasons for this may vary. Some dubbing studios feel like viewers would relate better to characters from the same country as them. Some feel that the original culture would fly over the audience's heads. Others might not want to invoke Translation Convention to explain why everyone in a show originally set in America is speaking native-sounding European French since it would make it harder to get immersed. Sometimes they want to emphasize that the story is universal. And sometimes they're right; Tropes Are Not Bad, after all. In some cases, some corrections may in fact be called for if the work is set somewhere other than where it was written, subject inevitably to cultural blind spots, if it gets localized where it is set.

Compare Cultural Translation, where characterization and actions are changed rather than the setting to fit the target audience's culture (and to avoid things like Values Dissonance). See also Macekre and Cut-and-Paste Translation, the kind of dubs that would often do this sort of thing, and Localized Name in a Non-Localized Setting, for when characters are given Dub Name Changes but there's no Thinly-Veiled Dub Country Change. The opposite of this trope is We All Live in America, where the work is explicitly set in a country other than where the author is from, but the characters and set pieces make it look like they never left their backyard. A subtrope of Adaptational Location Change, when the work changes the setting entirely in a non-cosmetic manner.