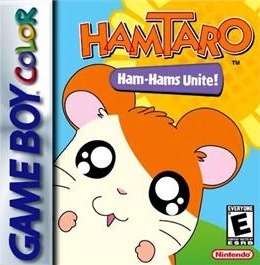 Hamtaro: Ham-Hams Unite! is an adventure game developed by Pax Softnica and published by Nintendo for the Game Boy Color, based on the Hamtaro franchise.
Advertisement:

The story revolves around you, as Hamtaro, helping the Clubhouse leader Boss round up all of the other twelve Ham-Hams for a surprise. Along the way, Hamtaro learns new words to add to his Ham-Chat notebook, which are used to solve puzzles needed to get the Ham-Hams to the Clubhouse or acquire other words.