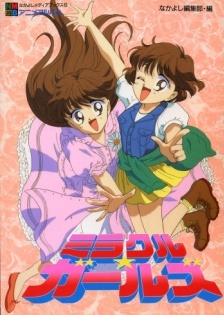 Miracle Girls is a Magical Girl manga by Nami Akimoto, which was serialized in Nakayoshi from 1991 to 1994. It was adapted to a 51-episode anime series that aired in 1993.

Toni and Mika Morgan (Tomomi and Mikage Matsunaga in Japan) are identical twins with special powers. Together, they are able to teleport and communicate telepathically. The athletically challenged Mika begs Toni to switch identities with her for her school's sports day track meet, where she and Toni are teamed with Mika's arch-enemy Jackson Niel (Yuya Noda), in the relay race. Toni, however, finds herself drawn to Jackson. Toni's success in the relay causes the captain of the track team, Chris Kubrick (Hideaki Kurashige), to try to recruit Mika. So, once again the sisters switch identities. However, the science teacher, Shinichiro Kageura, finds out about their psychic powers, and begins to stalk Tomomi. Sensing that Mika (who was really Toni) has been behaving strangely, Yuya visits them at home.

A video game adaptation was released for the Super Famicom in 1993.