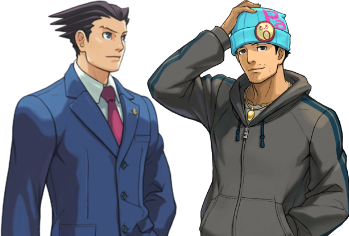 Oh, this is that sitcom about the lawyer and his bum roommate, right?note Wait, what do you mean "that's the same guy"?
Advertisement:

A form of Characterization Marches On in which a character in a long running series gets Put on a Bus. Years later, the writers bring the character back, except... he isn't the same person anymore. He behaves differently, has different skills or interests — he's become a completely different person.

Writers could justify it by saying that character development took place offscreen, but it seems a little as if the writers have basically written a new character and slapped his traits onto someone who already existed in canon to make the introduction easier.

The inversion of Suspiciously Similar Substitute. Era-Specific Personality can overlap. See also Not as You Know Them and The Other Darrin. Compare Adaptation Personality Change, when the two versions of the same character are in different continuities, and You Don't Look Like You, which has more to do with dramatic physical changes.