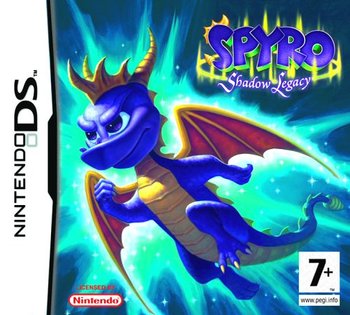 The tenth Spyro the Dragon game, released on the Nintendo DS in 2005, is the last original game in the classic continuity and its last installment until the release of the Spyro Reignited Trilogy in 2018.
Advertisement:

The game starts with Spyro, having decided to take a break from his many adventures, at Dragon Shores. Just finishing his vacation, Spyro bids his friends on their way back to the dragon realms goodbye, having to spend the rest of his time there studying under the elders. Not long after though, a dark storm rolls in, knocking the inhabitants of the island out. Waking up in the shadow realms, Spyro begins his search for his friends while encountering enemies even he himself is powerless against. After managing to make his way out, he is granted a shadow stone by Elder Tomas to protect him against the draining effects of the shadow realm and allow him to transfer between the two worlds, and with some convincing, Spyro begins to learn the art of Dragon Kata from the elder Ragnar, as well as some basic magic training to combat the one behind all this.

Now, once again trusted into the role of saving the dragon realms, Spyro must do battle against traitorous elder Red, the dragon bent on dragging the realms into the shadow realms. Now face with what is quite possibly his most difficult adventure yet, will Spyro be able to overcome it like always, or has the purple hero finally met his match...?