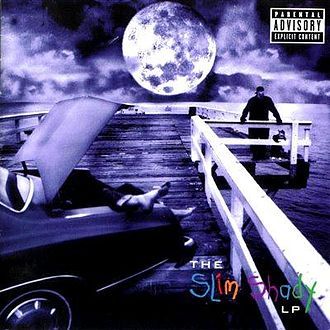 The Slim Shady LP (1999) is the second album and major-label debut of Eminem, and it's safe to say it came at a time when he needed it most.

His first studio album, Infinite (1996), was a flop, only selling around 1,000 copies and evoking many a complaint of his similarities to Nas and Jay-Z.

In the meantime, following an unsuccessful suicide attempt, and inventing an angry and violent (and sightlier goofier) alter ego, he released The Slim Shady EP a year later, and things started turning around. Most notably, the EP gained the attention of Dr. Dre, who quickly wanted to contact Em and work on a major-label release with him. The result was this very album — a look into Em's psyche both through the cartoonish obscenity of his alter ego Slim Shady (introduced in the namesake EP) and his real-life struggles with poverty and bullying among other subjects.

The album would go on to be certified quadruple platinum by the RIAA. In the wake of SSLP's release, Em went from an underground nobody to an overnight mainstream celebrity. Additionally, SSLP won the Grammy Award for Best Rap Album.

I just found out my mom does more tropes than I do: