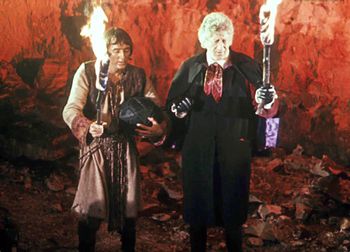 Last day of filming; ten minutes later, the fire department was brought in.
Grey cities linked by grey highways across a grey desert. Slag, ash and clinker - the fruits of technology.
— The Doctor isn't a fan of 30th century Earth... or the colour grey, for that matter
Advertisement:

The one with Buddhism. note No, the other one. No, the OTHER one.

Written by Bob Baker and Dave Martin. This six-episode serial first aired April 8 to May 13, 1972.

The Doctor is off on another mission for the Time Lords (who presumably figure that giving him busywork will keep him out of trouble - how wrong they are!) - he has a sealed message to deliver to recipients unknown aboard a space station orbiting the planet Solos in the 30th century; Jo, going with him, is, by now, learning how this works and briefly wonders if the sealed message is actually a bomb. Solos is about to gain independence from Earth's Empire, but the Marshal in command is determined to prevent this and is working with scientist Jaeger to convert Solos's atmosphere into an Earth-like one which will kill the Solonians.

The Earth administrator is murdered on the Marshal's orders and Ky, a young Solonian leader, is framed and flees to the planet, taking Jo with him. The Doctor follows, and his message pod opens for Ky, evidently the intended recipient. The contents of the pod turn out to be some ancient carved stone tablets.

Exploring the Thaesium mine in which they find themselves, the Doctor meets a human scientist called Sondergaard, who is searching for a cure for the mutating disease affecting the Solonians. The tablets turn out to be information about the history of the Solonians - apparently the mutations are part of a natural cycle and not a disease at all, and the radiation from the mined Thaesium is part of the cycle.

The Doctor takes a crystal from the mine and returns to the space station to use the laboratory, but is captured by the Marshal along with Jo and Ky and forced to complete the atmosphere converter. Sondergaard gives the crystal to Ky, who mutates first into a hideous creature, then an ethereal angelic being (apparently the ultimate mutation of the Solonians). The Doctor once again sabotages the machine, killing Jaeger, and Ky evaporates the Marshal.