EastEnders is so unlike the actual East End that it may as well be set in Narnia. The real East End has got Hawksmoor churches and fashionable nightclubs and a thriving Bangladeshi community; Walford's just got Keith Miller swabbing windows with a rag on a stick.
—Charlie Brooker 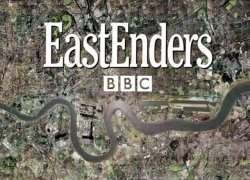 I can see my house from here!

EastEnders is a popular Soap Opera on The BBC, created as a competitor to ITV's Coronation Street. Since 1985, it has followed the lives of the inhabitants of Walford, a fictional district in the East End of London. Renowned for the absolute misery it inflicts on the characters. Their Twisted Christmas episodes are particularly depressing and it is not unknown for characters to die alone in the snow on Christmas. Which is why it's a jinx to say "This is gonna be the best Christmas Walford's ever had."

And whenever something good happens, like a wedding, or a well-received baby, this is predictably balanced out by a dirty secret - like an affair that has been written specifically to make the marriage tense - a little blackmail being prepared, a vicious attack resulting in a slow death, somebody getting raped, the villain of an arc pulling a Karma Houdini, or perhaps somebody just being portrayed as being desperately lonely or suicidal.