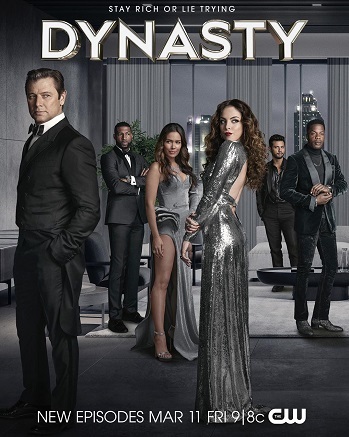 Vicious. Ambitious. Delicious.
Blake: We need to come together to protect our family.
Cristal: You mean our business.
Fallon and Blake: Same thing.
Advertisement:

Dynasty is a 2017 Prime Time Soap airing on The CW, and a modernised remake of the 1980s series of the same name, developed by Josh Schwartz, Stephanie Savage (The O.C., Gossip Girl) and Sallie Patrick (Revenge).

Much like the original series, Dynasty is focused on the wealthy Carrington family: Blake (Grant Show), the ruthless patriarch and founder of his company; Fallon (Elizabeth Gillies), his ambitious daughter with designs on the family business; and Steven (James Mackay), his son and the Black Sheep who resents his privilege.

The Carringtons are rocked by the arrival of Cristal Flores (Nathalie Kelley), an employee of Blake's who quickly becomes his new wife. Joining her is nephew Sam Jones (Rafael de la Fuente), who also happens to be romantically linked to Steven. Jealous of her new stepmother, Fallon plots against both her and her father with the backing of the Carringtons' business rival, Jeff Colby (Sam Adegoke). Another person who opposes Cristal is Joseph Anders (Alan Dale), the house majordomo (do NOT call him the butler) who knows about her shady past.

Cristal is later revealed to have been donning the identity of another woman, Cristal Jennings (Daniella Alonsonote replaced Ana Brenda Contreras from the third season onward). Alexis (Elaine Hendrixnote replaced Nicollette Sheridan from the third season onward. After Sheridan departed in the second season, Elizabeth Gillies briefly pulled double duty playing as her for the rest of the season.), Blake's ex-wife, returns midway through the first season to complicate the family drama. Aside from Fallon and Steven, she and Blake had sired two other children: Adam (Sam Underwood), who was kidnapped as an infant and is currently known as a doctor named Mike Harrison, and Amanda (Eliza Bennett). Anders' daughter, Kirby (Maddison Brown), arrives to the household in the second season, as does Dominique Devereaux (Michael Michele), Jeff's mother. Michael Culhane (Robert Christopher Riley), the family chauffeur, and Liam Ridley (Adam Huber), a writer who forms a relationship with Fallon, also have major roles.

Unlike the original series, the setting is Atlanta rather than Denver.