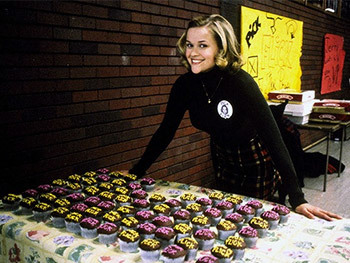 You know someone who went to the trouble of individually icing all these cupcakes deserves to be Class President!
Advertisement:

She gets straight A's in her classes, while also taking charge of multiple school clubs and volunteering at a homeless shelter in her spare time. She's unfailingly polite to her peers, older adults, and younger children alike. She might not be a fashion plate but she never steps outside her home without looking perfectly presentable. Nobody doubts that big things are to be expected of her.

They are, right? Otherwise, it would be so frustrating for all that effort to go to waste!

The Go-Getter Girl is a young woman who devotes herself to achievements other than homemaking above everything else. The reasons for this might vary: she may have some personal goal she feels she needs to accomplish, she may be desperately seeking the approval of others, or she may simply enjoy competing against her peers and taking the number one rank. In any case, she's well aware of the effort that her path requires, but she's more than up to the challenge. She finds it easy, or at least manageable, to discipline herself to avoid distractions, and while others might complain about the expectations of superiors, she will do whatever she can to meet and exceed them.

Despite all appearances, things aren't always as easy for the Go-Getter Girl as they may seem. All the discipline that goes into creating her persona of perfection may crowd out the possibility for spontaneity, fun, and other pleasures of youth. It's not that she doesn't want these things deep down; it's just that she feels that she doesn't have the luxury of acting on them. For this reason, while she might always seem completely put-together in public, in the few moments she has to herself in private, she's liable to let herself go and act like a slob and a slacker...or at least fantasize about doing so. At extremes, the pressure of maintaining her image can get to her, causing her to snap and turn evil or insane.

Tropes Are Not Bad. Although the Go-Getter Girl must deal with a certain amount of pressure, her personality also allows her to accomplish things others of her peers cannot. If she is able to find balance in her life, she has the potential to become a true leader.

Romance is often a secondary concern in such a character's life; she's more focused on her future for the time being. If her mind does turn to love, she's liable to look for someone of a status befitting her own perceived value. In the case where she is secretly attracted to someone she sees as beneath her, expect a lot of furious denials and put-downs as she (generally unsuccessfully) tries to distance herself from her feelings.

If the Go-Getter Girl is in high school, she is very often a Class Representative or Student Council President, as well as focused on entering the Ivy League, Oxbridge, or Tokyo University. College Go-Getter Girls will be racking up internships and academic distinctions as they position themselves for an appealing job when they graduate. The oldest a Go-Getter Girl is likely to be in her late 20s or early 30s; by this time, if they have continued to stay on the path to success, they will have begun to take on real responsibilities and grown into a different trope.

Go-Getter Boys can exist, but they are much rarer. This may be due to the historical legacies of sexism, as discrimination has forced women to prove themselves in order to get the same rewards as men. For this reason, a boy with academic talents or personal charisma is more likely to focus on developing those traits alone, without the need to appear perfect in other areas.

Compare and contrast with Plucky Girl, a similarly strong and determined character type, but one that shows more comfort with breaking rules and flouting social conventions, as well as The Woman Wearing the Queenly Mask, who has these pressures thrust upon her as a member of royalty rather than freely choosing them.

Compare also with Academic Alpha Bitch and The Perfectionist. Also not to be confused with female characters who work with Getter Rays.