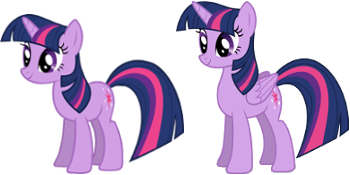 Click here to see her as future ruler of Equestria 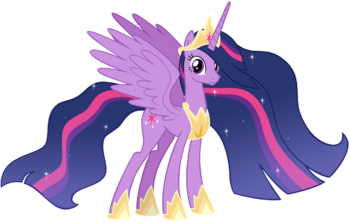 "I am her student and I will do my royal duty, but the fate of Equestria does not rest on me making friends."
Debut: "Friendship is Magic, part 1" ("Mare in the Moon")
Voiced by: Tara Strong, Miyuki Sawashiro (Japanese)
Singing by: Rebecca Shoichet

The bearer of the Element of Magic. The protagonist of the series, a unicorn (who later becomes an alicorn) from Canterlot who serves as Princess Celestia's apprentice, and the eventual successor of Celestia and Luna. She's less than thrilled at first about the suggestion that she should try making friends but naturally winds up giving it a shot. She has a natural talent for Magic that goes far beyond what most unicorns are capable of. She's also very intelligent, levelheaded, and organized, making her a great unofficial leader for the Mane Six. However, her neuroses sometimes cause problems. Her Pillar of Old Equestria is Star Swirl the Bearded.