These individuals have played roles of great importance in Equestria's history and lore.

Six legendary heroes that defended Equestria from evil in the long distant past.
Entire Group
Star Swirl the Bearded 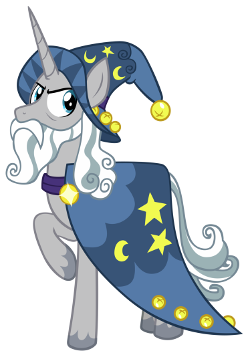 "Star Swirl the Bearded is only the most important conjurer of the pre-classical era..."
First Mentioned: "Luna Eclipsed"
Debut: "Shadow Play – Part 1"
Voiced by: Christopher Britton

A wizard from the dawn of Equestria's history. He is regarded as the most powerful unicorn in history; he mentored Celestia and Luna, as well as Clover the Clever, he created more than 200 spells, and a wing in the Canterlot castle archives is named for him. Twilight Sparkle and other studious unicorns idolize him and deeply study his work. Despite his importance his fate is unknown, even to Celestia and Luna; he just vanished without a trace one day. The Season 7 finale "Shadow Play" marks his first on-screen appearance and reveals Star Swirl's connection to the Pillars of Equestria and what happened to them. As a Pillar, his relic is the book where he wrote his memoirs and the accounts of the Pillars' deeds.

Prior to Season 7, Star Swirl was very much prone to Depending on the Writer. He had never appeared on the show until "Shadow Play" and details of his life were vague, so depictions of him (both his personality and his role in events in the "1000 years ago" timeframe, like the Tree of Harmony and Nightmare Moon) are very inconsistent. Following the events of "Shadow Play" fleshing out his backstory, the events of many of his prior appearances in novels and comics became a mess of Continuity Snarls—some could still be considered canon subject to Broad Strokes, others have definitely been Retconned and could not possibly have happened. 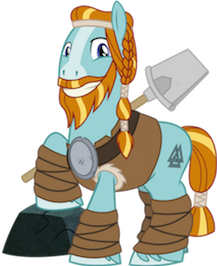 An earth pony from a seaside village that dreamed of nothing more than joining the warriors of the Mighty Helm that protected it, but he was too scrawny and weak. When a volcanic eruption threatened the village, Rockhoof's will to protect it was so strong that he spontaneously grew into a mightly stallion, and rapidly dug a trench to divert the lava flow and save his people. As a Pillar, his relic is his trusty shovel. 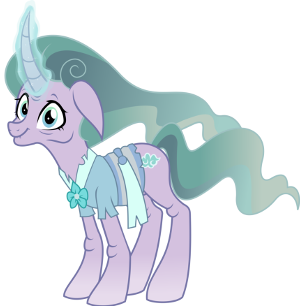 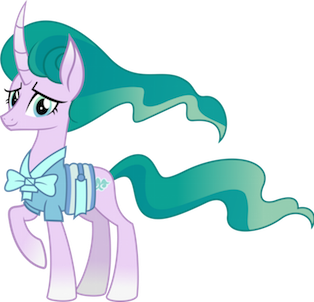 "Mistmane was a very promising young sorceress. She was as talented as she was beautiful and kind..."
First Mentioned: "The Crystalling – Part 2"
Debut: "Campfire Tales"
Voiced by: Ellen-Ray Hennessy

A famous unicorn sorceress, Mistmane was the most beautiful pony in her homeland. While she was away to study magic, her friend Sable Spirit botched a spell to make herself beautiful and made herself ugly, and in jealousy ruined the village to take away its beauty. Upon her return, Mistmane performed a powerful spell that restored both Sable and the village to their former glory, but did so at the cost of her looks. As a Pillar, her relic is the single flower she used as a focus for her beauty spell. 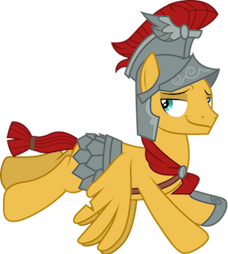 "A long time ago, before the Wonderbolts were even founded, Flash Magnus was a lowly cadet in the Royal Legion..."
First Mentioned: "The Crystalling – Part 2"
Debut: "Campfire Tales"
Voiced by: Giles Panton

A pegasus soldier from the Cloudsdale Royal Legion. After a pair of dragons captured his companions and his allies were too afraid to attempt rescue, Flash Magnus distracted the dragons with nothing but a magical shield to defend him. His comrades were rescued and Flash Magnus became honored for his bravery, keeping the shield as proof of his valor. As a Pillar, his relic is his shield, Netitus. 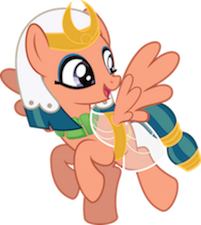 The pony who never gave up hope.
"Like her fellow villagers, Somnambula didn't have much, but she used what she had to keep others from giving up hope..."
First Mentioned: "The Crystalling – Part 2"
Debut: "Daring Done?"
First Speaking Appearance: "Shadow Play – Part 2"
Voiced by: Murry Peeters

The namesake of a village in Southern Equestria, Somnambula was a pegasus who gave hope to her people in times when a Sphinx terrorized the land. When the prince of her village tried to stand up to the Sphinx and was abducted, Somnambula rescued him by walking across a narrow bridge blindfolded, relying on his voice to guide her. The furious Sphinx flew away and Somnambula became honored by her people as a hero. As a Pillar, her relic is the blindfold she wore during the Sphinx's trial. 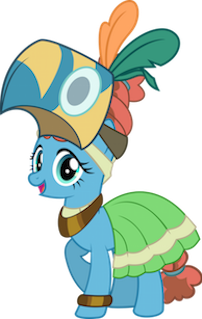 "Mystical and masked, she came in the night and cured everything from hoof cough to fur blight..."
First Mentioned: "The Cutie Map – Part 1"
Debut: "A Health of Information"
Voiced by: Mariee Devereux

Known to most as a world-renowned earth ponynote Originally described as a unicorn in Season 5 sorceress who possessed eight mystical items, Mage Meadowbrook moonlighted as an elusive masked healer called the "Mystical Mask", traveling Equestria to heal the rarest and most terrible of diseases. As a Pillar, her relic is her healer's mask. 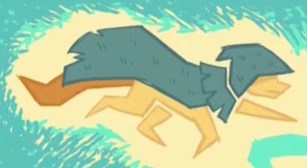 Star Swirl the Bearded's student and protégé and assistant to Princess Platinum, Clover the Clever accomplished some notable feats of his own, including defeating a sorceress who used an enchanted stone to erase people's memories. Played by Twilight Sparkle in the Hearth's Warming Eve pageant. 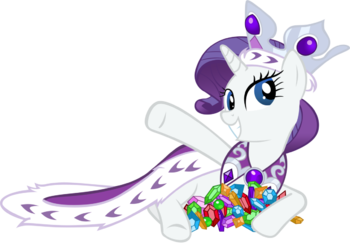 The daughter of the Unicorn King at the time of Equestria's founding. Played by Rarity in the Hearth's Warming Eve pageant. 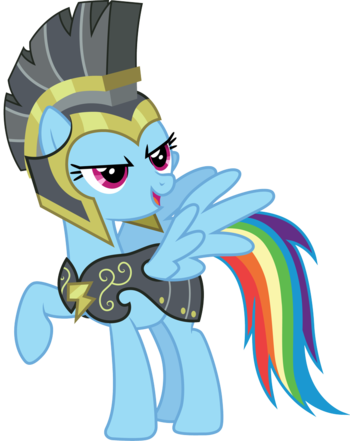 The leader of the Pegasi. Played by Rainbow Dash in the Hearth's Warming Eve pageant. 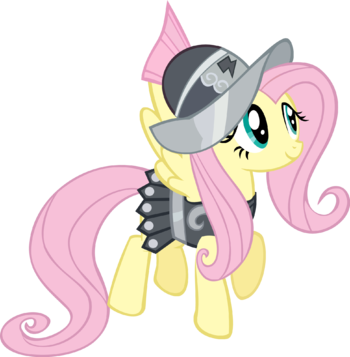 A subordinate of Commander Hurricane who accompanied him in a mission to scout for a new land to inhabit. Played by Fluttershy in the Hearth's Warming Eve pageant. 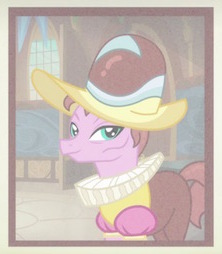 The leader of the earth ponies, Chancellor Puddinghead is... something of an eccentric character. Played by Pinkie Pie in the Hearth's Warming Eve pageant. 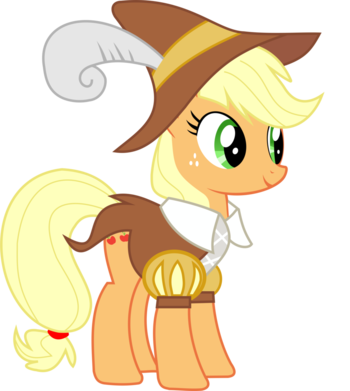 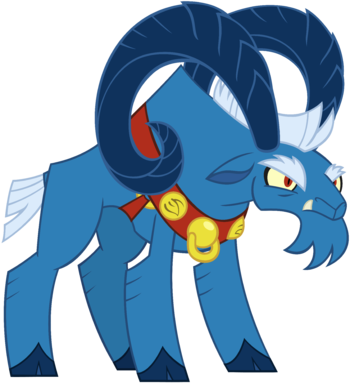 First Mentioned: "A Flurry of Emotions"
Debut: "The Beginning of the End – Part 1"
Voiced by: Doc Harris

A treacherous ram who ruled Equestria in ancient times, before the three pony tribes united as one. Known as "the Father of Monsters", he unleashed a horde of terrible creatures across the land. When the legendary heroine Gusty the Great stole his magical bell, Grogar's reign was brought to an end.

For tropes applying to his G1 counterpart, see My Little Pony 'n Friends. 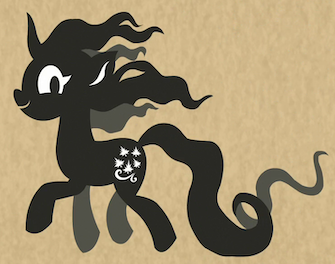 First Mentioned: "A Flurry of Emotions"

A unicorn hero who sealed away the evil wizard Grogar and ended his reign of terror, long before the founding of Equestria.

The Tree of Harmony 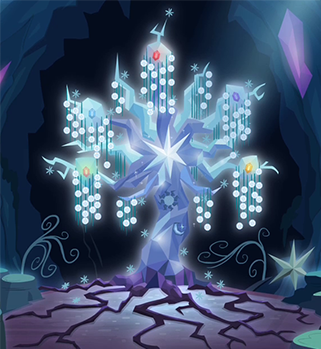 "My cutie mark!"
Click here to see the tree's avatar 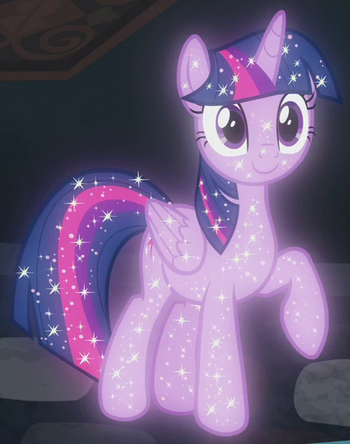 Click here to see the Treehouse of Harmony (SPOILER) 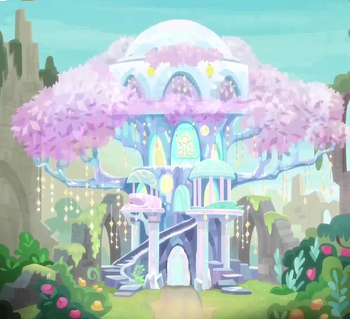 "Friendship is in your nature."
Debut: Princess Twilight Sparkle – Part 2"
First Speaking Appearance: "What Lies Beneath"
Voiced by: Tara Strong (in the form of Twilight Sparkle)

The source of the Elements of Harmony. Over 1000 years after they were taken to defeat Discord, the Tree was dying without the Elements, necessitating their return to save it. In turn, the Tree grew a chest that when unlocked, granted Rainbow Power and grew into Twilight Sparkle's castle, granting her the title Princess of Friendship. Afterwards it created the Cutie Map, enabling the heroes to continue their task of spreading friendship with greater efficiency. The Tree's role in Equestria's backstory and its abilities have literally grown as the series goes on. 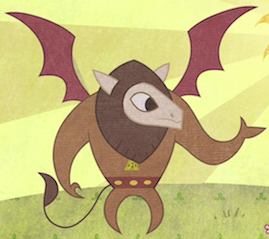 Tirek's brother. Scorpan and Tirek came from a distant land to take over Equestria and its magic a very long time ago, but Scorpan came to appreciate Equestria after he befriended Star Swirl the Bearded and the other ponies. He tried to convince Tirek to join him, but he refused, so Scorpan alerted Celestia and Luna of his plans and Tirek was imprisoned in Tartarus, while Scorpan returned home to his own land. 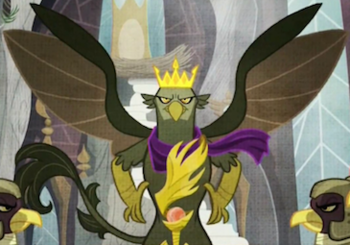 The first king of Griffonstone, who united the griffons with the golden Idol of Boreas.

The fourteenth and last king of Griffonstone. 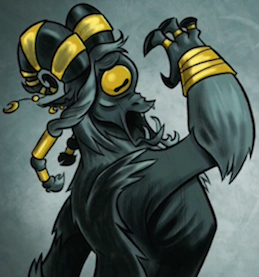 A goatlike, one-eyed monster, Arimaspi attacked the city of Griffonstone during the reign of King Guto to steal the Idol of Boreas. He fell into the Abysmal Abyss while fleeing from the city, and the Idol was lost with him. 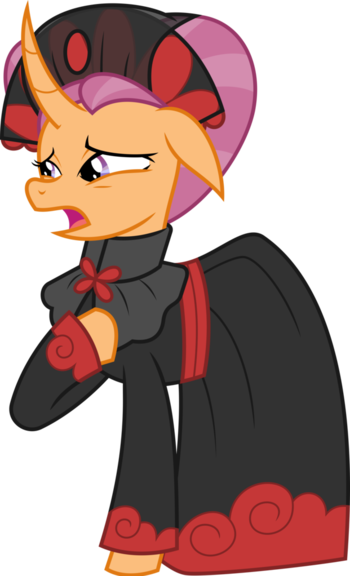 Mistmane's childhood friend, Sable Spirit was deeply jealous of her friend's beauty and skill. She attempted to perform a spell to make herself beautiful, which backfired spectacularly and made her hideous instead. She eventually made herself empress, after which she dedicated herself to stealing the beauty of her land for herself. 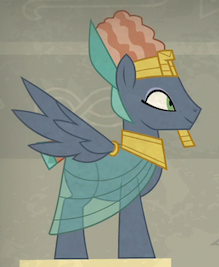 The prince of Somnambula's homeland. He attempted to stand up to the Sphinx that was terrorizing it, but was captured by the creature instead. He was rescued by Somnambula, whom he afterwards made one his closest advisors as a reward for her deeds. 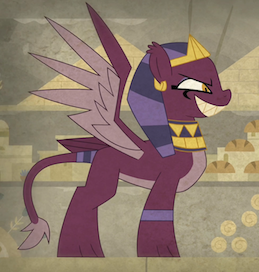 A giant, pony-headed monster that terrorized southern Equestria more than a thousand years before the show's time, the Sphinx forced the ponies to give her their food as tribute, causing a famine. She kidnapped Prince Hisan when he tried to confront her, but was driven away after losing a contest to Somnambula.

Gusty the Great hid the Bell

Grogar explains how Gusty the Great stole his Bewitching Bell, the source of his dark magic, and, unable to destroy it, hid it away at the top of the highest mountain in Equestria.

Example of:
For Doom the Bell Tolls

Gusty the Great hid the Bell

Grogar explains how Gusty the Great stole his Bewitching Bell, the source of his dark magic, and, unable to destroy it, hid it away at the top of the highest mountain in Equestria.