Just because the Mane Six are True Companions doesn't mean they don't have family who love them dearly. Quite a few direct family members have appeared in supporting roles or cameos.
open/close all folders

The clan which Applejack belongs to, a huge herd that works several apple farms all across Equestria. 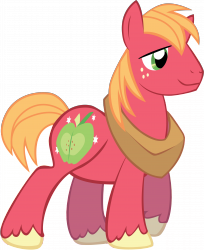 "Eeyup."
"But still only one pony, and one pony plus hundreds of apple trees just doesn't add up."
Debut: "Friendship is Magic, part 1" ("Mare in the Moon")
Voiced by: Peter New

Big Macintosh is Applejack's older brother, a red earth pony with an orange mane and freckles. While most of the Apple clan live scattered around Equestria, he stays at Sweet Apple Acres with his sisters and Granny Smith. 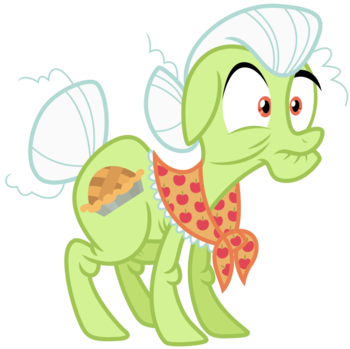 "Now wait you fellers, hold it! / You went and you oversold it! / I guarantee that what you have there won't compare / For the very most important ingredient can't be added or done expedient / And that's quality, friends, Apple Acres' quality and care!"
Debut: "Friendship is Magic, part 1" ("Mare in the Moon")
Voiced by: Tabitha St. Germain

Applejack's, Apple Bloom's, and Big Macintosh's paternal grandmother. Age has done a number on this green earth pony, and while she's not crippled or senile, she's getting there. Despite this, she still manages to continue her role as the matriarch of the Apple family. 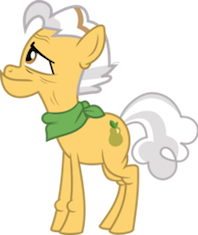 Applejack and her siblings' grandfather on their mother's side, and patriarch of the Pear family. He and Granny Smith were bitter rivals in their heyday, but he has since mellowed considerably with age. 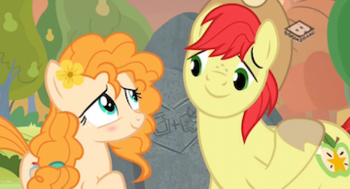 The parents of Applejack, Big Macintosh, and Apple Bloom. The two were members of the feuding Apple and Pear families that nonetheless fell in love. 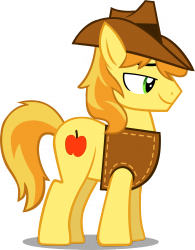 Debut: "Over a Barrel"
Voiced by: Michael Daingerfieldnote  Andrew Francis did audition for Braeburn, mentioned in this

interview, but it did not survive the final cut

Applejack's cousin who lives in the newly-settled Appleoosa. Is quite proud of the new settlement, but is also willing to listen to both sides of the conflict between the Appleoosians and the resident herd of Buffalo.

Aunt and Uncle Orange
Debut: "The Cutie Mark Chronicles"
Voiced by: Brian Drummond (Uncle Mosely Orange)note  according to this

Applejack's aunt and uncle who live in Manehattan. Unlike the rest of the family, the Oranges live a high class, posh lifestyle. Whether they grow oranges or not isn't clear. According to the Blind Bags, Uncle Orange is named Mosely Orange. 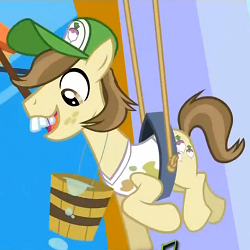 "It's me, Hayseed Turnip Truck! We met at the big hoedown in Ponyville last month?"
Debut: "Sweet and Elite"
Voiced by: Matt Hill

An earth pony with buck teeth who wears a trucker cap with a turnip on it and a dirty white T-shirt. His cutie mark is three turnips. Hayseed works as a window washer in Canterlot in "Sweet and Elite" and appears in Ponyville in "Sleepless in Ponyville". "Apple Family Reunion" sees him attending said reunion and even being included in the family photo, revealing him to be part of the Apple Family. While not the brightest, he appears to be nice, greeting and complimenting Rarity when he sees her. In the Expanded Universe, a short feature in IDW Publishing's My Little Pony Micro Series Issue #3 suggests that he started working in Ponyville, had a crush on Rarity but couldn't get her affection, and so moved to Canterlot to start his own business to be able to show his success to her. 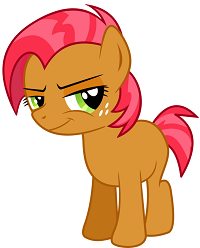 A young filly from Manehattan who visits Ponyville and her cousins Applejack and Apple Bloom to escape being teased as a blank flank. Instead of befriending her cousin and fellow blank flank Apple Bloom, she starts causing problems for her and the Cutie Mark Crusaders. Eventually she sorts things out with the Crusaders, and joins them as the group's fourth member. As of "Bloom and Gloom", she finally gained a Cutie Mark: A pair of scissors with the handles resembling an apple. 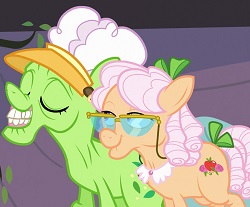 Granny Smith's aunt and favorite cousin, respectively. They seem to be around as old as her, and are members of the Gold Horseshoe Gals alongside Granny Smith and Goldie Delicious. Auntie Applesauce is also a possible link between the Apple and Pie families, being — maybe — a fourth cousin twice removed to the Pies. 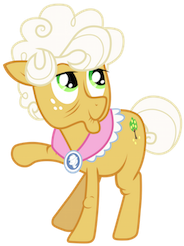 A cousin of the Apple family, whose house is practically a museum of old Apple family relics and heirlooms. She's also the Apples' go-to pony for their family records. She's also a member of the Gold Horseshoe Gals, alongside Granny Smith, Aunt Applesauce and Apple Rose.

The Apples of Ponyville have a LOT of relatives, but so far we mostly only know their appearances and/or names. In "Friendship is Magic, part 1", Applejack names off Apple Fritter, Apple Bumpkin, Red Gala, Red Delicious, Golden Delicious, Caramel Applenote not to be confused with the Caramel who keeps losing grass seeds, (Uncle) Apple Strudelnote who first appears in "Family Appreciation Day", Apple Tartnote a baby colt who apparently has seven siblings, Baked Apples, Apple Brioche and Apple Cinnamon Crisp, in addition to her immediate family. Later, in "The Ticket Master", she mentions "Apple Brown Betty! Uh, the dessert. Not my auntie." Later still, Apple Dumpling, Apple Leaves, and Half Baked Apple appear in "Apple Family Reunion". And in "Somepony to Watch Over Me", Granny Smith goes to visit Great Aunt Pine Apple. According to the Blind Bags, one member is named Apple Honey, one apparent member is named Peachy Sweet, and another apparent member is named Lavender Fritter, according to Enterplay's Collectible Card Game and Gameloft's My Little Pony game, one member is named Apple Cobbler, and also according to Enterplay's Collectible Card Game, one member is named Gala Appleby. The Blind Bags also give Red Gala and Apple Bumpkin the respective names Crimson Gala and Apple Dazzle. There is also evidence that Pinkie's family also has distant ties to the Apple clan, but it remains inconclusive for now. For Applejack's great uncle Honeycrisp, see the Expanded Universe page. 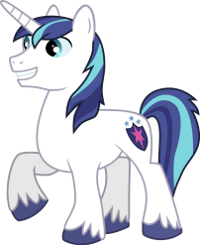 Prince Shining Armor is Captain of the Canterlot Royal Guard and a prince of Equestria through marriage to Princess Cadance, but more importantly, he's Twilight Sparkle's older brother. They were very close when they were younger, but started to grow apart when she moved to Ponyville. He presides over the Crystal Empire alongside his wife.

He has a human counterpart in the Equestria Girls movies, first appearing in Friendship Games as a Crystal Prep alumnus. 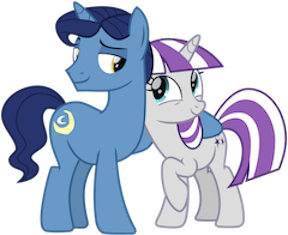 The parents of Twilight Sparkle and Shining Armor. 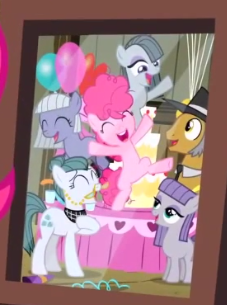 A family of earth ponies who own a rock farm outside of Ponyville. On this farm, there was no talking and no smiling... until the pinkest of the family's daughters suddenly threw a party and brought laughter and sunshine into their lives. They first appeared in flashbacks in "The Cutie Mark Chronicles" and "Magic Duel", but four of them play a major role in the Expanded Universe Tie-In Novel Pinkie Pie and the Rockin' Ponypalooza Party!, which reveals their names: the mother Cloudy Quartz, the father Igneous Rock, the gray sister Marble Pie, and the bluish sister Limestone Pie. Enterplay's Collectible Card Game has affirmed Igneous Rock's name, listing it with a trademark symbol. It's said in Pinkie Apple Pie that they have distant ties to the Apple clan, but it remains inconclusive as both genealogy records were smudged.

Three other members of Pinkie's family have been mentioned on various occasions in "Friendship Is Magic, part 2", "Too Many Pinkie Pies", and Pinkie Pie and the Rockin' Ponypalooza Party!: Granny Pie, Nana Pinkie, and a (then unnamed) older sister, Maud Pie. 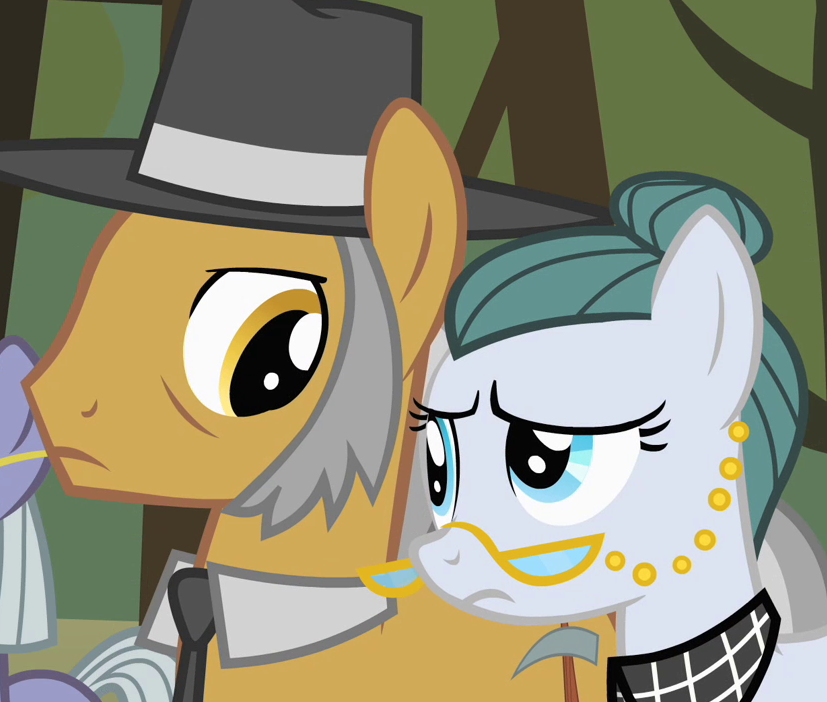 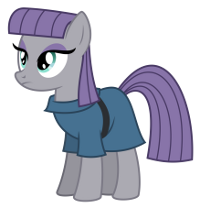 "I don't know if you've noticed, but I don't show my enthusiasm for things quite in the same way my sister does."
First Mention: "Pinkie Pride"
Full Debut: "Maud Pie"
Voiced by: Ingrid Nilson

Pinkie's older sister, who has a thing for rocks. Unlike her sisters, Maud is very stoic and hardly expresses any emotion at all. She and Pinkie have been close friends for years, and share a tradition of trading rock candy necklaces. Her full name is Maudalina Daisy Pie. 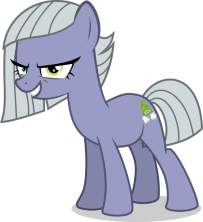 "Gaze into the eyes of Limestone Pie. Ma and Pa may own this rock farm, but I keep it running."
Debut: "The Cutie Mark Chronicles"
Major Role: "Hearthbreakers"
Voiced by: Ingrid Nilson

Pinkie's other older (and possibly oldest) sister, a no-nonsense mare with a very gruff and bad-tempered attitude. She is fiercely protective of the rock farm and its traditions, especially its important landmark: Holder's Boulder and the Pie Family's quarry. 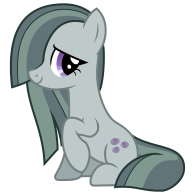 The youngest of the Pie sisters, born a few minutes after Pinkie herself. She is very quiet and shy, in contrast to Maud's stoicism, Limestone's gruffness and Pinkie's exuberance.

Granny Pie
One of Pinkie's grandmothers, she was a big figure in young Pinkie's life. Given her name, it's implied she was married to Feldspar Granite Pie and thus Igneous' mother and Pinkie's paternal grandmother.
Nana Pinkie
Implied to be Pinkie's other grandmother, she is not mentioned as often, but was still important to Pinkie's development. She was the one who told Pinkie stories such as the Mirror pool. If she is Pinkie's other grandmother, then by process of elimination, she is most likely Pinkie's maternal grandmother (and thus Cloudy Quartz's mother). Pinkie Pie herself may have been named after her.
Holder Cobblestone
First Mentioned: "Hearthbreakers"
The ancestor of the Pie family, he found Holder's Boulder in a dragon's nest and founded the Pie family rock farm. He's mentioned by Granny Smith.
Li'l Cheese (spoilers) 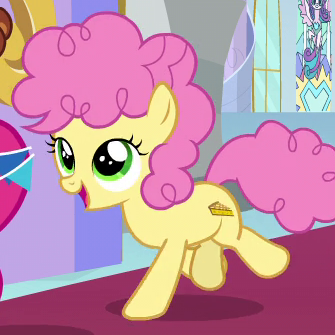 Pinkie Pie and Cheese Sandwich's son in the future.

Debut: "Sisterhooves Social"
Voiced by: Tabitha St. Germain (Cookie Crumbles) and Peter New (Hondo Flanks)note  both according to this

Rarity's parents, a pink unicorn mare and a white unicorn stallionnote As shown in the "Elements of Harmony" guidebook couple. Sweetie Belle lives with them; in "Sisterhooves Social" they leave her in Rarity's care before going on vacation, and in "One Bad Apple" their house (including Sweetie's room) is shown, with her father making a brief cameo fishing outside the house (wearing the same shirt and hat). They also make an appearance alongside Sweetie Belle at the beginning of "Inspiration Manifestation" and in "A Hearth's Warming Tail" with the Cutie Mark Crusaders. 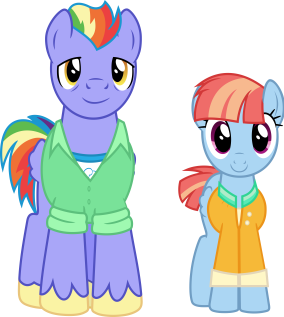 Rainbow Dash's parents, who love their daughter very much, and are not afraid of letting everyone around them know it. 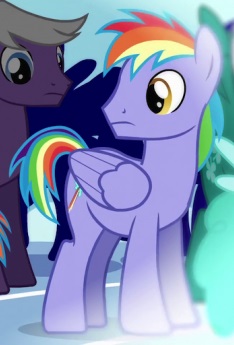 An older male relative of Rainbow Dash's who appears briefly in a flashback and in the last scene if the third Hearth's Warming Eve special. He is a lavender stallion with a rainbow mane. 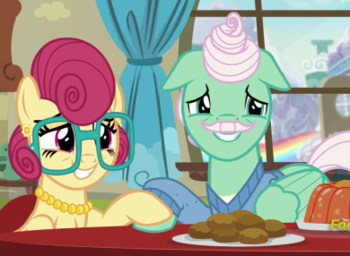 Fluttershy and Zephyr Breeze's forgiving, unaggressive parents, who have recently settled down to enjoy the peace of retired life, with Mrs. Shy tending to her garden and Mr. Shy to his cloud collection. 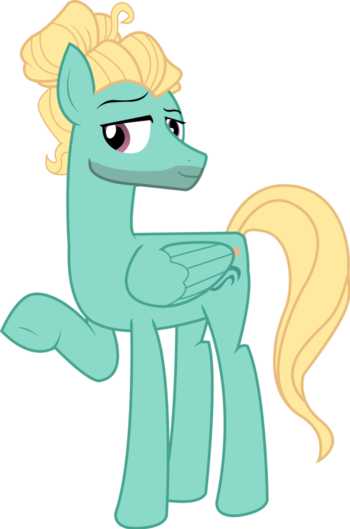 Fluttershy's irresponsible younger brother, Zephyr Breeze is a slacker who refuses to put his all into anything he does out of fear of failure, while at the same time considering himself the most talented pony to grace Equestria with his presence. As a result, he's unable to hold onto any job for long, instead mooching off of his parents' and sister's hospitality.