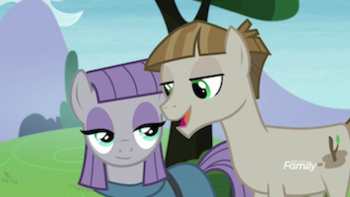 This is not a photoshop. Maud really is smiling.
Written by Nick Confalone
Advertisement:

After enjoying an evening of Maud's stand-up comedy, Pinkie asks Maud about getting together the next day to prepare for her upcoming birthday, knowing that she's been busy the last few nights. Maud agrees. However, when Pinkie comes by the next day, Maud is nowhere to be seen. Thinking Maud is playing hide-and-seek, Pinkie looks everywhere for her, and ends up in Starlight Glimmer's room. Starlight suggests that Pinkie should just continue the birthday plans and get the cake before the store closes.

At the store, Pinkie becomes irritated with a stallion that is taking a rather long time just to decide how to say goodbye to the store clerk. Pinkie manages to get him out of the store, but by then, the clerk's on her own lunch break. Annoyed, Pinkie leaves to find Maud waiting outside. Maud apologizes for not being there for Pinkie and explains that she now has a boyfriend, and introduces Pinkie to Mudbriar, the stallion Pinkie just met.

Pinkie learns that Mudbriar is just as obsessed with sticks as Maud is with rocks, the pair having met at a petrified wood show which included both their interests. Despite her efforts at being friendly, and Maud's assurances that he makes her very happy, Pinkie cannot get used to Mudbriar's mannerisms and finds herself perplexed and annoyed by his relationship with her sister. Starlight advises Pinkie to spend some time with Mudbriar planning Maud's birthday party to get to know him better, since they both clearly care about Maud and that commonality might help them bond.

In Pinkie's party cave, she and Mudbriar come to a disagreement about Maud's preferences — most importantly, Mudbriar is certain that Maud doesn't like surprise parties at all. Pinkie, growing further irritated, takes Mudbriar to where Maud and Starlight are flying kites and asks Maud directly about how she feels about surprise parties. Maud says she likes them, but only because they bring Pinkie so much happiness. Realizing that Mudbriar was right, Pinkie runs off, believing she's no longer Maud's "best sister friends forever". She travels to her family's rock farm to get away from Maud and Mudbriar, and talks to Limestone and Marble about how Maud's been behaving around him. Limestone offers Pinkie a metaphor, that Mudbriar is like a geode — Pinkie may only see the outer blandness of Mudbriar's personality, but she should know that Maud sees something within him that she likes.

Inspired, Pinkie returns to Ponyville and makes amends with Mudbriar, and offers to listen to his advice for Maud's party. Later that day, the rest of the town gathers for the party, while Maud, Mudbriar, and Pinkie watch from afar, as Pinkie decided to hold a surprise party that Maud didn't have to attend, based on Mudbriar's advice. Maud declares it is the best party she's had.