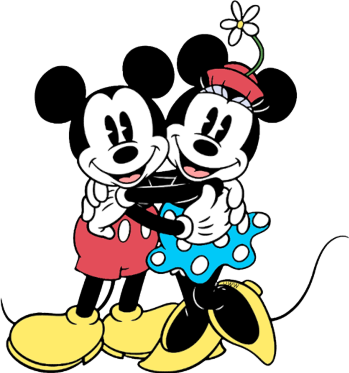 When the dot in your eye looks like most of a pie...
"What a woman! Eyes like pies..."
—Felix the Cat, The Twisted Tales of Felix the Cat
Advertisement:

During the 1920s and going into the 1930s, animated characters were sometimes drawn with eyes or pupils that were black and circular, but shaped like a pie that's had one slice removed from it, with the missing slice being an oversimplified representation of a radial light reflection. It is remembered today as one of the most iconic features of the Inkblot Cartoon Style. Pie-eyes were widespread until around the time color became the standard for most cartoons in the early 1940s, by which time the Inkblot Cartoon Style had fallen out of favor, and Western Animation as a whole had undergone significant Art Evolution. The style sometimes appeared in comics as well, particularly the Disney ones, and others based on characters that first appeared in animation.

When it shows up in modern media, it's usually as an homage or throwback. Parodies of the Inkblot Cartoon Style will almost always employ this along with Rubber Hose Limbs and the like.

Another variation is Crescent Moon Pupils, where the characters are drawn with pupils shaped like crescent moons.

See also Black Bead Eyes, which were also employed in black and white cartoons; Sphere Eyes, which began to replace them both around the 1940s; and Sudden Eye Colour, which happens when a character who was once pie-eyed gets more "standard" looking eyes in redesigns. Not to be confused with a slang term for being drunk, or with the results of a Pie in the Face.