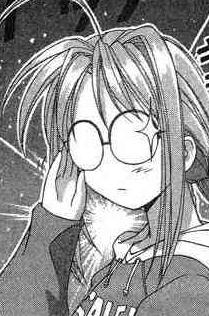 They're not coke-bottle glasses he's wearing, they're paperweights in a frame. Glasses in Comics, Manga and animated media usually come in four forms — there are tiny little things that don't get in the way (see Cool Mask), so-clear-they're-almost-not-there spectacles worn by pretty girls (a.k.a. meganekko) and handsome boys, lenses meant to hide the character's eyes from anyone who wants to get a glimpse at their soul (Scary Shiny Glasses), and then there are Opaque Nerd Glasses.

Opaque Nerd Glasses are two 4-inch disks that hide the wearer's eyes behind blank white circles, that can be marked either with thin black spiraling lines, or, in the western variant, small or hazy dots denoting pupils. In some cases, the person's eyes will stay as tiny black dots even when the glasses are taken off, possibly to indicate how bad their eyesight is, or to make them look naked without their iconic glasses. They indicate that a character is painfully geeky, and is probably Blind Without 'Em.

Female characters with Opaque Nerd Glasses often reveal that they were Beautiful All Along upon their removal. Male characters may be The Short Guy with Glasses.

This trope is found more often in comedy than in drama.