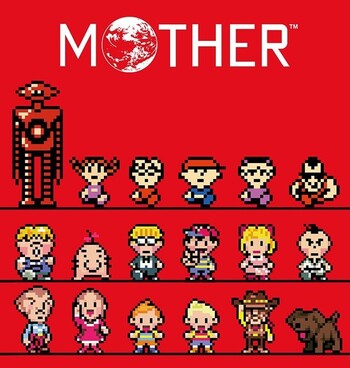 No crying until the end. (Japanese) エンディングまで泣くんじゃない。 (Endingu made nakun ja nai.)
I believe the morning sun's
Always gonna shine again, and
I believe a pot of gold
Waits at every rainbow's end, oh
I believe in roses kissed with dew
Why shouldn't I believe the same in you?
— Snippet from "Pollyanna"

, a Recurring Riff throughout the series
Advertisement:

For the first game in the trilogy, which shares the same Japanese title, go here.

Mother is an Eastern RPG trilogy by Nintendo, the brainchild of Japanese writer and media personality Shigesato Itoi as a personal experiment in the ability of the video game medium to tell a story. Yep, it's an auteur game series, and one of the first of its kind, too. It was named for the John Lennon song "Mother", of whom Itoi is a large fan, and is subject to quite a lot of Title Drops.

With an eccentric like Itoi at the helm, it's not a surprise that Mother exemplifies the "Widget Series": the crude-yet-oddly unique art style, the self-aware wall breakages, the parodical interpretation of modern-day Earth (in this case, America... skewed by the perspective of a foreigner exposed to it only through TV and cinema), and an emotional roller-coaster of Dadaist humour and tragedy.

The series as a whole is a chronic victim of No Export for You, and while it is rather famous now, that may be more related to, or at least instigated by, its continued presence in the Super Smash Bros. series.

The series has become a major source of inspiration for indie-produced RPGs with a similar offbeat-yet-creepy atmosphere. Notable examples include Undertale, LISA, Yume Nikki, OFF and Space Funeral. Citizens of Earth is another game influenced by Mother that focuses more on the parodical modern setting. Oddity started off life as a fan made Mother 4 but eventually rebranded to avoid legal issues. It has also spawned some fan games, such as Mother: Cognitive Dissonance, an Interquel that attempts to bridge Giegue's transformation into the Gigyas seen in Earthbound.

In addition to games, various obscure pieces of Japan-only spin-off media were released, including a pair of novels based on the first two games, named Mother -The Original Story- and Mother 2: Giygas Strikes Back which received fan translations in late 2021, and several mangas based on Mother 2.

The MOTHER trilogy as a whole contains examples of: