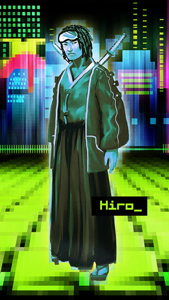 'Cause you can be way cooler inside a computer.
Image

.
Used with permission.
"You're not you.
You're your digital you,
Virtually real
But controlled by real you."
— Colin, Don't Hug Me I'm Scared, "Computers"
Advertisement:

The modern form of Avatar that most people are likely to encounter in Real Life: a digital representation of a person in a computer world, broadly, the Internet. It can be as simple as the small graphic attached to posters' names on countless web forums, blogs, and the like; or it can be as complicated as a fully-animated 2D or 3D game character. For futuristic incarnations, add a dose of Virtual Reality to the mix. In some definitions, "avatar" is taken to mean "any game character you control"; in others (which is the definition used for this trope), a line is drawn between game characters and avatars that's more in line with avatar archetype. If Alice is controlling a character, like Mario, designed solely by the game designers, she's playing as that character. If she's controlling a character made to reflect her desired persona, almost always with a considerable degree of customization, she's controlling her avatar. This includes pretty much every MMO since MMOs have had graphics, and many if not most computer RPGs also rely on it.

While the Ur Examples can be found in old games — the 1979 Dungeon Crawler Avatar, the use of the Avatar in Ultima IV in 1985, the first online social world Habitat in 1987 — the Trope Namer and Trope Codifier is generally thought to be Neal Stephenson's Snow Crash. William Gibson had written about 3D characters in Cyberspace roughly 6 years earlier, and Vernor Vinge even earlier, but Snow Crash used the name "avatar" for them and ultimately popularized the concept.

In fiction, Digital Avatars are often found in Cyberspace, particularly incarnations of The Metaverse. The inverse of the Digital Avatar is the Projected Man, where a computer entity gets a digital representation to function in the real world. Just because it's not real doesn't mean there can't be romance: see Kiss Me, I'm Virtual.