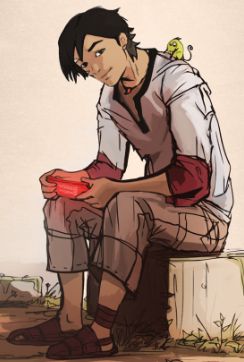 Hint: Sarab is not the green one.
You Vote, We Draw!
Advertisement:

, the interactive webcomic is a sci-fi webcomic which takes place In a World… called Thalamus where humans almost destroyed nature with their irresponsible use of technology. To prevent this from happening again and possibly for the last time, the survivors restrict knowledge to a select few who are tasked with using it to help nature recover.

These people are recruited at a young age and are moved to academies, called "Hubs" to be taught the sciences. The Hubs also serve as control stations that manage the weather and other natural powers to maintain a livable ecosystem.

The rest of the population has no access to scientific knowledge and have reverted instead to agriculture as a means of living and the arts for entertainment. Sarab, the eponymous protagonist is an indecisive student at the Hub of Caldaia.

The tagline at the top of this page is the interactive component to the comic. At the end of each page, a problem and two possible solutions are laid out. The audience then votes via poll on which solution Sarab should use. After a few days the poll is closed and the page is produced, then the cycle starts all over again.