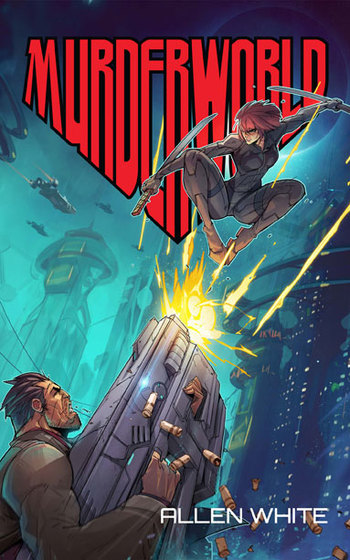 "Look—if you have a shitty life, games allow you to simply escape it. And you can take out your rage on people who aren’t actually going to die when you kill them. The beauty of the human mind is its power to create metaphor. Murder is a metaphor for problem-solving, for overcoming adversity, for slaying our demons. It’s catharsis, conquest, and narrative resolution all rolled into one. And it’s fucking fun."
Advertisement:

Murderworld is a 2018 novel by Allen White.

Perry Dunne is a San Francisco corporate lawyer. His aggressive boss, Greg Horrow, seeks to gain prestigious game-design clients, and believes that employing a team of competent gamers will enhance the legal firm's prestige. He forces Perry to play the world's most popular game, the violent simulation Murderworld, and insists that Perry (a terrible gamer) earn five kills during the current tournament or lose his job. After being easily dispatched by homicide virtuoso Mari Night, Perry hires her as his mentor, not realizing her game persona hides the identity of 12-year-old Korean schoolgirl Chun Soo-yun. Their quest sets them against both corporate and gaming clan power — including Perry's own famous gamer mother — in the high-stakes arenas of game tournaments and clan merchandising.