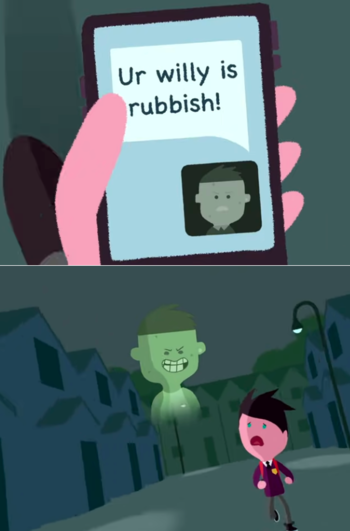 Sticks and stones can break my bones, and words will certainly hurt me.
Cyberbullying is a particular type of harassment that is done over digital devices such as cell phones, computers, and tablets. Adolescents are often targeted although people of any age can be subjected to it. According to the U.S. Department of Health and Human Services website stopbullying.gov, there are three distinct types of issues that distinguish it from other types of bullying: persistence, permanency, and lack of noticeability.
Advertisement:

It is persistent in that the devices, such as a cell phone, used to carry out the bullying are ones that are not easy to disengage from. It is permanent since, as opposed to a verbal taunt, the bullying itself is stored on a digital device forever unless specifically removed. It is hard to notice because other people, such as teachers and parents, may not overhear or see the bullying take place, and also because, thanks to the anonymity that the internet provides, sometimes the bully's identity can be completely unknown.

Cyberbullying is distinct from Trolling in that the latter is agitating groups of people as opposed to one person specifically. Trolling can easily become cyberbullying, however, should a troll turn attentions on an individual.

Can overlap with New Media Are Evil, when the digital medium itself is blamed for the bullying rather than putting the blame on the bully, Internet Jerk, when someone takes advantage of their anonymity to bully people across the internet, as well Instant Humiliation: Just Add YouTube!, when YouTube could be just one way a bully targets a victim. Thanks to the nature of smartphones having built-in cameras and wi-fi capability, the bully could also double as a malicious form of Camera Fiend. This may be one motivation for Catfishing. Eventually can involve Suicide Dare and lead to Driven to Suicide for the victim. See also Social Media Is Bad, when social networks and internet forums are seen as a way to exploit cyberbullying and as tools for cyberbullies.

This is often the subject for a Lifetime Movie of the Week.

Occasionally, when a series or movie tackles this subject, the writers did not do the research and it can lead to a Clueless Aesop when covering the issue. This falls under the Internet Safety Aesop since cyberbullying is a frequent problem.

Sadly this is Truth in Television, so No Real Life Examples, Please!