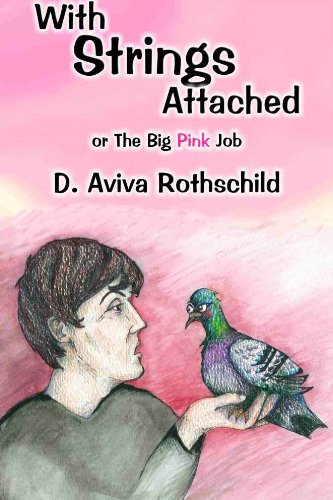 "Don't worry," said John, "we've already brought the gods back, we're the gods of rock 'n' roll, remember?"
"Do a miracle and send us home, then," said Ringo.
"Sorry, I've used up me quota. Fuck!" John threw his seashell towards the ocean as hard as he could with his left hand, then sat up fully. "I don't care what our mission is. I resent bein' dropped here without so much as a `Would you like to go?' I may not even do whatever we're supposed to do, if we do have a job. We might not, y'know. Maybe some fuckin' Beatlemaniac just thought `Eh, wouldn't it be a lark to put the Beatles on another planet and see what they do.' Well, this one's not gonna do anythin', so fuck you!" John shouted at the sky, giving it the finger.
Advertisement:

With Strings Attached, or The Big Pink Job is possibly the most famous single Beatles Real-Person Fic out there, and certainly one of the oldest known. Aviva Rothschild, who wrote the first-ever bibliography of graphic novels, started writing Strings in 1980 at the age of 15 and completed it in early 2009. It has been online since 1997 and is so well established that there was a brief period when, if you googled the common phrase that is the main title, it would come up first. Half the story is available on Rational Magic

, the author's website, and the entire work can be purchased as a downloadable PDF or a thick paperback book (commonly referred to by the author as the Big Pink Brick).

Strings is a serious (if frequently hilarious) epic fantasy—no Slash Fic, no Time Travel, no romance, no Alternate History. It's spring 1980, and the four ex-Beatles awaken on the strange planet C'hou, terrified out of their minds, sixteen years younger, and utterly clueless as to why they're there. As they struggle to make sense of their predicament, they must survive the dangers of two very different countries: Ketafa, a quasi-Victorian theocracy based on a fake religion, and Baravada, a dying magical anarchy whose inhabitants' fondest wish is to find monsters to kill. Observing all this are some quite fannish aliens, whose dialogue punctuates and clarifies much of what's going on, and who have their own little dramas taking place as events spin rapidly out of their control.

Ultimately, the four are spectacularly equipped to embark upon a quest that, if successful, will remove a curse that prevents the real gods from seeing Ketafa. Careering through three crazy universes (including a Funny day on an alternate Earth that combines Beatlemania, New York City, Xanth, and Harvey), they collect the three scattered pieces of the Vasyn, a statue that is the (sub)titular Big Pink Job. But restoring the Vasyn to Ketafa will be the most dangerous task facing them....

Notable for, among other things, its portrayal of the four ex-Beatles as real people, not as any of their fictional personas, who undergo genuine Character Development as the story progresses. Also notable for being a rare fantasy where the main characters are essentially Actual Pacifists.

Rothschild completed the first half of the sequel, The Keys Stand Alone (circa 2015); its first chapter

This lengthy work encompasses a huge number of tropes, the most significant examples of which are: