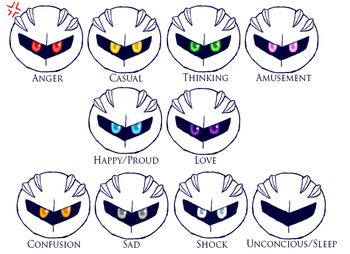 The eyes tell all.

A person's emotions are typically read by changes in their facial expression and tone of voice, but some characters and creatures go further, and may experience dramatic physical changes in response to their shifting moods.

This often takes the form of changing colors, such as in the tone of a person's skin or in glowing effects. In these cases, this goes hand-in-hand with Color-Coded Emotions, causing characters to literally become red when angry, blue when sad, and so on. Other changes may be more physical in nature; an angry character may grow spikes or claws, for instance, while a calm one may soften into a blob-like shape.

This may cause complications for these characters, as it will make it effectively impossible for them to hide or disguise their feelings or reactions. Physical changes may prove more useful as responses to the causes of the emotion, such as by giving an angry character natural weapons or making a frightened one more able to hide.

This often overlaps with Involuntary Shapeshifting. For another unusual way to show emotion, see Expressive Hair. For an extreme example triggered by anger, see Hulking Out. Luminescent Blush, Blue with Shock, Green Around the Gills and No Poker Face are more mundane versions of this. When somebody changes in response to other people's emotions, they're an Empathic Shapeshifter.