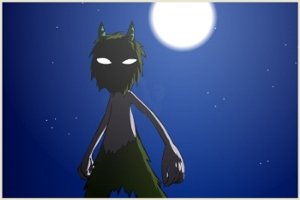 , Brackenwood tells the odd story of Bitey, a mysterious creature known as a Dashkin. Living in a forest, Bitey fills his day with picking on other creatures, which has a tendency to come back to haunt him. Other creatures inhabit this strange land, like slow-witted elf-creature BingBong, Lemonee Wee the witch, and the easily angered Sasquatch-like Morrugs.

In 2016 it has gotten a spin-off series called "Brackenwood Wild Documentary." Its purpose is to teach us about the wildlife in the series.

Created by Adam Phillips, AKA Chluaid, a former Disney animator, the series is famous for its absolutely beautiful artwork, which means new episodes of the series usually take a long while to come out. Also featured on Phillips' own Web site

Adam Phillips also has a Patreon account, which you can find here