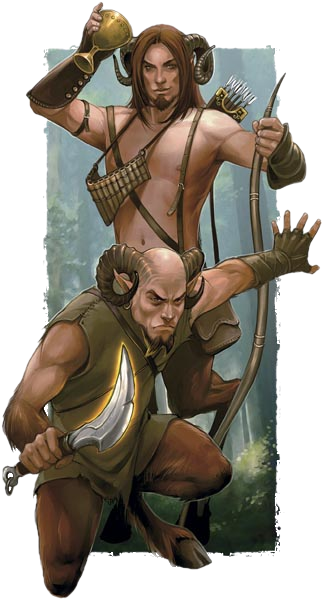 Baaaaa-d boys, baaaaaa-d boys, whatcha gonna do when they come for you?
Elora: Oh, hello. We didn't get the chance to introduce ourselves before. My name is Elora.
Spyro: Uh, hi. I'm Spyro. What are you, some kind of goat?
Elora: I'm a faun, you dork!
— Spyro 2: Ripto's Rage!
Advertisement:

Fauns and Satyrs, while originally quite different, have often been fused together, both in the original myths and modern fiction, which is why they share a page. Both are human from the waist up, but fauns have the legs of deer, while satyrs have the legs of goats. Both may have pointed ears, or horns, or both — and for some reason, both are very likely to be male (though fauns seem a bit more likely to have females.)

Originally, Satyrs had the tail and ears of either horses or donkeys, though later they acquired goat legs, becoming almost identical to fauns. Their goat parts may be a reminder of their nasty nature. In earlier Greek art they were portrayed as quite ugly, though later they became more youthful and graceful. They were associated with sex, wine, and pipe playing (the Classical Greek equivalent of Sex, Drugs and Rock & Roll). They also laughed at everything, and had reverence for none but their patron deity, Pan.

A faun, more akin to deer than to goats, would be the satyr's more gentle and retiring cousin, preferring the forest to the field. They live in harmony with nature, and are generally just low-key and peaceful. They also had goat legs originally, though now they also have deer legs in popular art (maybe because faun sounds like fawn?)

The most famous of all goat people is the great god Pan, and his Roman counterpart Faunus/Inuus. Pan was the god of all wild creatures, and had a trickster streak a mile wide. Despite his wildness and temper (his shouts would inspire pan-ic in all who heard him) he was a true friend to shepherds and little critters. And if your Satyr lives underground in a cavern full of flame, well, he might be a bit nastier...

See Our Centaurs Are Different for a similar half-man half-beast creature from Classical Mythology.

The fauns and satyrs in Fracture Hills are harassed by Earthshapers who imprisoned the satyrs and their temple in stone.

The fauns and satyrs in Fracture Hills are harassed by Earthshapers who imprisoned the satyrs and their temple in stone.