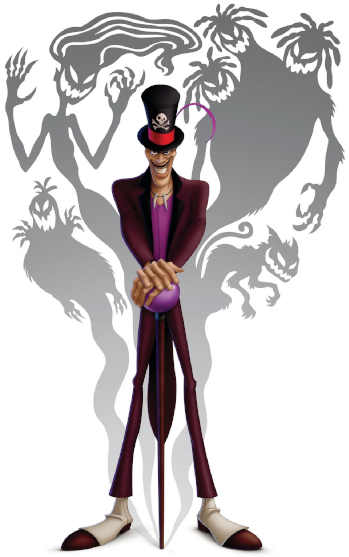 He's got friends on the other side.
"I have gone through the most terrible affair that could possibly happen; only imagine, my shadow has gone mad; I suppose such a poor, shallow brain, could not bear much; he fancies that he has become a real man, and that I am his shadow."
— Hans Christian Andersen, "The Shadow"
Advertisement:

You're sitting by the fire one night, reading your book, when suddenly there's a gust of wind. The light flickers and you see your shadow move... except you're not moving. You get up and see that there are actually two shadows — one is yours and one, well, that one's moving independently of you. How (creepily) amazing!

This is the Living Shadow. Sometimes it's evil, sometimes it's good, sometimes it's merely mischievous. It may be a ghost, a person with the power to become a shadow, a shadow magically animated and separated from its person (who often Casts No Shadow), an alien that only appears to be a shadow, or something much, much worse. Regularly, they're used as Nightmare Fuel.

Voluntarily separating yourself from your shadow is one of the more dangerous things you can do. It usually has the obvious corollary that you Cast No Shadow but that's merely the obvious.