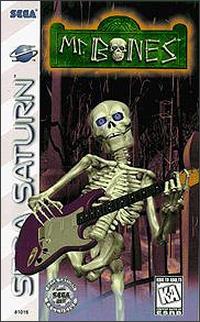 Mr. Bones is a multi-genre video game released on the Sega Saturn in 1996. It was developed by Zono Incorporated and was published by Sega. Guitarist Ronnie Montrose composed most of the game's music and appears in one cutscene. Though the game wasn't much of a success during its release, it has since become a Cult Classic due in part to its campy cutscenes, great music, and its genuinely fun and inventive gameplay.

The game's plot is about a man named DaGoulian who wishes to end the conflict between good and evil by creating a world of pure evil. To do this, he uses energy named Skeletism in order to raise an army of undead skeletons that he commands using a set of special drums. However, the title character is re-animated with blue Skeletism rather than red Skeletism, causing him to retain his free will. Being considered an impurity, DaGoulian orders his minions to eliminate him. After escaping, he finds a blind guitarist in the woods who gives him a guitar to help him. Mr. Bones thus sets out to stop DaGoulian once and for all.